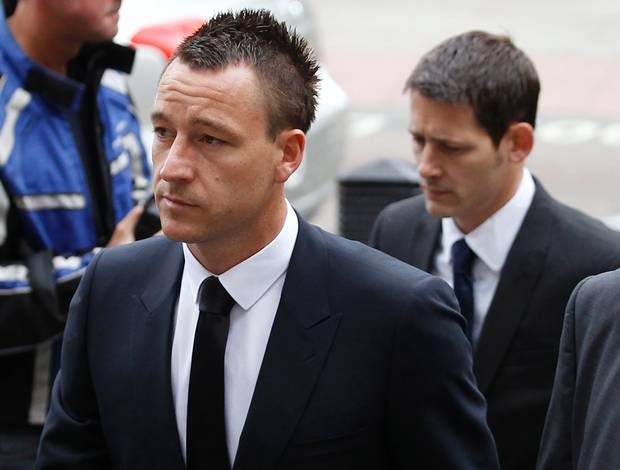 So, a couple of days into the trial and whilst Rio Ferdinand continues to give his opinion from behind fake film tweets, the ‘trial’ itself is starting to look every bit as fictitious as Rumpole of the Bailey.

Whilst the first day had me more than a little concerned the outcome might have far reaching effects for John Terry and Chelsea, by day two, I’d sussed the reason there’s no jury is probably an attempt to keep the laughing down to a minimum. I mean seriously, the fact that it wasn’t just thrown out of court yesterday is questionable although given the alleged pressure exerted to drag it into court in the first place, maybe I should be a little less surprised.

Let’s face it, if their arms had been any further up their backs, the police could almost have brought charges of ABH against Ferdinand and his PR agent Justin Rigby, with Rigby threatening “ramifications” and serious consequences if charges weren’t brought “because it would appear to black football players that it was a case of a white man’s word against a black man’s word.” All that in spite of Anton Ferdinand never actually hearing John Terry racially abusing him when he was alleged to have done it eh?

In fact, Terry’s QC, George Carter-Stephenson made it plain Anton Ferdinand was “clearly an unreliable witness.” To start with, the way Carter-Stephenson saw it, Ferdinand wasn’t even up for all the police involvement until Rigby had his say, that and the odd tweet of encouragement from close quarters seems to be what sent the whole thing down the legal route after an off-duty policeman was so upset by it, it ended up all over the internet.

Add that to “interrupted and incomplete” TV footage shown to the court and Ferdinand allegedly changing his version of the events between his statement to the police and the version he delivered in the witness box, and you’d have to think Terry’s QC has a point. Mind you, what about them YouTube videos? I mean, the world and his wife had already brought a guilty verdict on the strength of that after all. Strange then, that the evidence of  lip reading experts failed to offer anything in the way of confirmation of the exact words this ‘case’ appears to be based on.  Stranger still, that Ashley Cole and John Obi Mikel who were within earshot at the time weren’t called as witnesses.

There was plenty to hear by the sounds of it as well, with Ferdinand taking the piss out of JT for his affair with Bridge’s ex-missus and the pair of them having a right bitch. The prosecution, who seem to accept Ferdinand was a mouthy twat himself on the day, suggest JT lost it when he heard the “shagging your team-mates missus” comment – because he won’t have heard that much in the past couple of years, right? Terry however, in his defence, obviously only stifling laughter because it’s his name being dragged through the mud for God knows what, continues to insist he was repeating the words he believed Ferdinand was accusing him of shouting at the time.

Now, bearing in mind Terry says they were having a verbal sparring match at the time and even Ferdinand admits he was goading JT with words and actions used in an effort to wind him up, is the prosecutor serious in asking why JT didn’t respond to what he believed to be an accusation of racism with a simple “what?” Come on! Even Wayne Rooney can’t use the word ‘what?’ without throwing an ‘F’ in there somewhere.

Honestly, when Ferdinand was deemed to be 26 metres away when the pair of them carried on bitching, why on earth would John Terry throw the racism card into the mix – at high volume – knowing the cameras are trained on his every move anyway? Like he says, surely if you were going to do something that bad, you’d be doing it covertly? As far as he’s concerned, he was just wholly pissed off with the whole exchange, to the point he spoke to Ferdinand about it straight after the game. Of this exchange, JT says “I said: ‘I thought you were accusing me of calling you a black c***’. His reply to that was ‘no, no, no. We all said things we shouldn’t have said, that’s the end of it’. I asked him twice and he said no, I thought that was the end of it.”

Except it wasn’t the end of it and even in the face of such flimsy and almost farcial evidence now, it’s still being dragged out – although aside from the odd contemptuous tweet being slung in here and there, clearly fuelled by some kind of grudge, it’s starting to look a lot more sour grapes than substance.

Chelsea: Bring on the new season
John Terry Verdict: Will Justice Be Served?