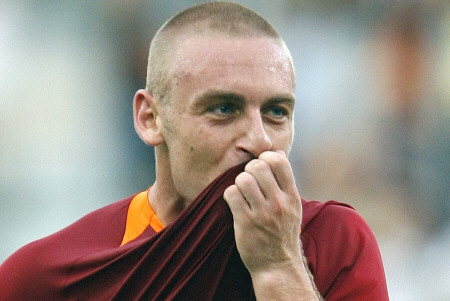 According to ‘reports’,  Klaas-Jan Huntelaar is on his way to the Premier League and whilst Fergie is said to have his eye on the Schalke striker, it goes without saying these reports reckon United will have competition from Liverpool, City, Spurs – and of course Chelsea.  Huntelaar has a buy-out clause of £17 million and with 29 goals to his credit last season, it’s felt that’ a small price to pay for Chelsea following Didier Drogba’s departure.

Meanwhile, Daniele de Rossi has talked of his interest in a move to the Premier League, saying “I like English football very much. I think now it’s probably more interesting than Italian football. There are lots of outstanding and talented players, as is the case for Spain as well.  I have received many offers from English football. And I must say that I feel attraction for it.” It goes without saying then that the minute those words were out of the AS Roma midfielder’s mouth, he too was linked to City, United and Chelsea.

In other news Messi once said of the Premier League “It’s a league I like.  I have friends that are playing there”, so rumours of his move to Chelsea are also imminent.