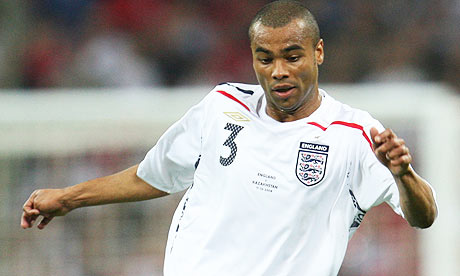 I can’t say I’ve ever thought about it before but Ashley Cole doesn’t really get involved in giving lengthy interviews does he? Obviously, given the way he’s always been portrayed, I don’t blame him. And yet, the most recent interview he’s given, talking about England, is such a far cry from the verbal two-fingers he gave after our Champions League win, it felt almost like a coming of age for the Chelsea defender.

As England prepare to take on Italy tomorrow, Cole talked about the differences under Roy Hodgson. One of them seems to be as basic as singing the National Anthem (something Roy has apparently encouraged), saying “It’s massive.  You can see so many people shouting it out because they really believe in what we are singing. When you’ve got all the England fans singing it as well it gives you goosebumps.  It’s something we’re proud to sing. When you come out and know you’re singing the national anthem it gives you a buzz and gets you lifted for the game.”

There also seems to be a ‘togetherness’ about this England group under Hodgson, with Cole saying “We are the same all over the world. You have different cultures and being at Chelsea, we have different people, who are different in the way they prepare for games and how they are.  With most English lads, and you see it with this group, we are like 11 bulldogs, who always work for each other and die on the pitch for each other. So far it has worked.”

As for Cole’s own career as he prepares for his 98th England appearance, the Chelsea left-back says “It is something when you are growing up, you want to win caps and play as many games as you can for your country.  I have been lucky enough to play 97 times and, you never know, but hopefully get to 100 in the final, which would be amazing.  It is what little kids’ dreams are made of.

I wouldn’t have believed that when I was a 16 year-old coming through the Arsenal youth team. I just love football. I’ve always enjoyed doing it. Being outside with my mates, getting really muddy and dirty and smelly. It’s something I always loved.  Of course, when you’re in the youth team at any club you watch the first team and want to emulate them and be those players. I’m so lucky to have had the career I’ve had and play with so many amazing players.”

One of those he clearly regards as an ‘amazing player’ is his club captain and team-mate John Terry. Clearly not oblivious to the furore that’s surrounded JT’s inclusion in the England squad, Cole says “Whatever has gone on in his life, he has put to the back of his mind and done his job in a great professional way.  He is someone who would put his body on the line for any team and any player he plays with. He is a joy to play with.”

He agreed he understood Gary Neville’s “waste of time” comments to an extent but for him, Cole regards that as having “unfinished business” with England.  So whilst Neville might now strive to address his former disappointments barking from the dug-out, Ashley Cole will undoubtedly carry his ‘bulldog’ spirit onto the pitch again tomorrow night.