Explaining Football To The Doubters… 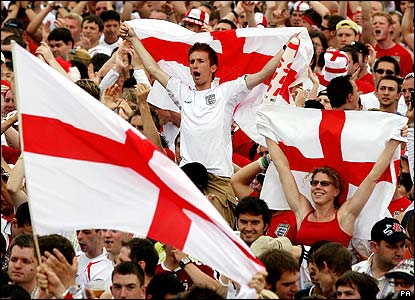 Years ago now, I was asked to write something in an English class to explain what it is that’s so special about football – no easy task when the majority of the class really weren’t into it and didn’t get what the fuss was all about. This week, with me refusing to go anywhere I’m invited while the Euros are on, I was put in a similar position of trying to explain to a non-football au fait gent (yes, they genuinely exist) what it is about the game that renders me an expletive ranting, hyperactive, nervous-wreck of an individual who refuses to answer the door/phone for at least 90 minutes of each night. Anyway, it reminded me of how I’d gone about it all them years ago in that English class, so I thought I’d share it on here:

It’s Not Just A Game

How do you convince those who refuse to hear

That it’s not all hooligans, fighting and beer?

To many supporters it’s a way of life

To some, an excuse for a break from the wife.

For release from those everyday stresses and strains

Caught up in it all, anonymity is found,

To the conformists’ ideals we are no longer bound.

Whatever the occasion, there’s a song that’ll fit.

Quips shouted out for missed goals and missed passes

Or the universally heard ‘Oi, ref! where’s your glasses?’

Sometimes it’s the unexpected wins we most treasure.

A chance to meet friends, catch up with some news,

Hold your head in your hands, go home with the blues.

No two matches the same, sometimes caught by surprise,

Others hardly daring to open your eyes.

Some defeats are harder than others to take –

Some games it’s more than just pride that’s at stake.

It’s not just a game, it’s so much more,

Because so many things can depend on ‘that score’.

Businessmen, families, all creeds and all races,

The pain or the joy will be shown on their faces.

All this and more together is found

Inside the shrine we call – the Football Ground.

So the doubters can sit at home moaning and hissing,

I couldn’t care less, they don’t know what they’re missing!