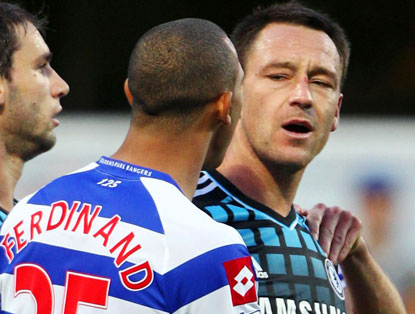 Is homophobia more acceptable than racism?  Ridiculous question obviously, they’re both as abhorrent as each other and oppression is oppression whatever form it might come in.

It’s potentially a question some Chelsea and/or England supporters might feel they’re entitled to ask though, particularly in the face of Antonio Cassano seemingly getting off fairly lightly following a blatant and very public homophobic comment aimed at the Italian national side, whilst John Terry continues to be persecuted on a daily basis for an, as yet, unproven allegation.

Personally, I wouldn’t support any individual (football player or not) guilty of either racism or homophobia – something I was forced to demonstrate quite clearly on a personal level once. Having said that, I’m a great believer in giving people a fair hearing, which would be why I listened to the individual in question affirm their racist views to me quite openly (so, saw and heard it for myself, complete with the intended context) before inviting them to kindly fuck off.

Of course, whilst that was an easy decision to make – largely because there was an open admission involved – not everything is quite so black and white. Yes, people can and will argue that Cassano isn’t facing a trial for his ‘homophobia’, or that it wasn’t aimed at a specific individual. I think I’d have to say he’s probably got off lightly with the media because they have a different agenda for the Euros and it’s an altogether easier comment to sweep under the carpet for his employers, since a youtube video isn’t being played media-wide on a loop. That doesn’t make it right of course and whether generalising or not, you can bet your arse any gay players in the Italy side would have taken that very personally.

I won’t go back into all the specifics because we’ve all read it from just about every angle it’s humanly possible to write it from by now. But suffice to say, Cassano responded to a question on homosexuals in the Italian squad with what appeared to be a blatantly homophobic comment. A question, by his own admission he’d had time to prepare and consider his response for. Does that make him homophobic? Well, he’d suggest not. Cassano suggests his words – that were stated clearly in a press conference – were misinterpreted, and it seems to be business as usual for the Italian as far as getting on with the Euros is concerned.

As for John Terry, he is accused of racism off the back of a few seconds clip on youtube where he is alleged to be directing the words “you black cunt” at another player. Certainly one word in there that has racist content but does that make him racist? Again, JT will argue not. However, whilst he may also claim his words were misinterpreted or taken out of context, he doesn’t get to carry on as if nothing has happened.  Yes, he’s still at the Euros, still playing but he does so under constant derision, constant abuse and constant condemnation, not just from a few rights groups here and there but from the nation almost as a whole.

Of course, being public enemy number one is nothing new to John Terry, it’s a label he’s had for years anyway. He screws a mate’s ex and he’s hung for it, fellow ‘professionals’ carry on with their sister’s in law and after riding an initial storm, all is well in their world again. John Terry admits to ‘sleepless nights’ following press speculation around interest from elsewhere and he’s berated for it, fellow ‘professionals announce their intent to move to a rival club and after a bit of arm-twisting, they’re forgiven on the grounds of falling foul of outside influences. The fact is, whatever the misdemeanour might be, John Terry’s is somehow worse.

This isn’t a tit-for-tat piece though, personally, I couldn’t give a shit what other teams or countries players choose to do, the point I’m making is that there seems to be one rule for JT and one for everyone else. And of course racism is no better or worse than homophobia, the point is, the outrage is deliberately selective – and whilst Cassano will carry on as if nothing’s happened, receiving the same level of support, John Terry will continue to be told he shouldn’t even be there. In fact, he won’t just find himself unsupported, he’ll be told his international side will be unsupported because of him.

Should he have just been left at home then? Some will argue he should, he’s facing a trial following a charge of racism after all. Fair comment. Wouldn’t any other individual facing the same charge be suspended from their workplace? Actually no they wouldn’t – or at least it’s not a forgone conclusion anyway. You see, everyone has rights – even John Terry – and being accused of something doesn’t equate to being guilty of it.

As for the FA ‘protecting’ John Terry, that’s laughable. As far as I can see, The FA are protecting themselves by following a very clear disciplinary procedure. Like any other organisation, should they have chosen to suspend JT, they’ll have been subject to an appeal and Terry’s representatives (just as a union rep would) would probably take them to the cleaners.

Firstly, John Terry is currently presumed innocent. He’s done nothing wrong as far as his employers are concerned yet, there’s no breach of contract, an allegation has just been made against him.  Of course, the alleged incident happened in the workplace but unless it is clear there is a likelihood this would be repeated, (and I somehow don’t see JT running around the pitch shouting it on a weekly basis) then, pending a full investigation, the most they could possibly get away with, would be to make any adjustments they deem necessary for him to remain at work. They did that by removing his captaincy – a demotion from a position of influence if you like. And let’s not forget, that’s happened without a guilty verdict already. Call that protecting him if you want, but I’m sure he doesn’t see losing his captaincy as protection.

None of this means the FA are endorsing racism within their ranks, since John Terry has not been found guilty of it. Of course, should he go to trial and actually get a guilty verdict, then they can have him out on his arse and no-one can question their actions whatsoever. Until then, they have to be seen to extend the same level of support to JT as anyone else – and if they fail to be seen to do that, that is when they can truly be labelled as having prejudice one way or the other.

Of course there’ll be plenty who continue to openly abuse JT – seemingly astonished that anyone should so much as raise an eyebrow at the continued bullying but as I said at the start, oppression is oppression, however you care to disguise it.

What A Deal For Di Matteo Could Mean
Chelsea to challenge for title?