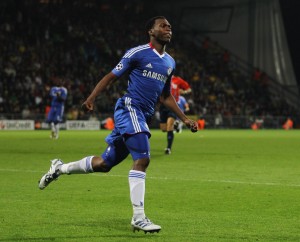 Under AVB Daniel Sturridge played an integral role for Chelsea scoring an impressive 9 goals before Christmas. a player that at times along with Ramires and Mata were helping paper over the cracks that were beginning to appear under AVB.

Chelsea fans rated him and at the time he was the top scorer for the club as neither Torres nor Drogba were firing. However since Christmas, and since the sacking of AVB, Sturridge has struggled for form only scoring 2 league goals since.

Further to this he struggled to hold down a place in Di Matteo’s side and when he was played was often selfish, careless in possession and greedy which led to Chelsea fans turning against him in a quite spectacular way.

Let’s however put it into perspective. Sturridge is just 22 years old and this is his real breakthrough season with Chelsea having previously been loaned out or spent time on the bench and in the reserves. With an abundance of strikers at Chelsea he was asked to play a role he was not naturally familiar with, cutting in from the right, supplying other players rather than necessarily scoring himself.

This required a good deal of discipline and he did the job well initially, working harder than a forward would usually have to and scoring the aforementioned goals in the process. No striker wants to play out of position but Sturridge was forced to. It must be remembered he still managed 11 goals and 3 assists this season which is good from the right. In fact he was the fourth highest scoring English player in the Premier League. He also had a higher pass accuracy rate than the players who had scored more than him.

He was at times dynamic and direct, running at defenders and causing problems when Chelsea were often short of ideas, for example creating the opening goal at Stamford Bridge against Manchester United, skinning Evra and forcing an own goal.

Much of it has been fair. Sturridge is at times sloppy, in fact his defensive work in the 4-3-3 whilst being above average for a forward was lazy and not good enough. His contribution led to Chelsea conceding against Arsenal in the 3-5 home defeat, but are we seriously going to criticize a forward for his defensive play?

Further to this he has generally been frustrating often over complicating things, trying skills and not playing the simple passes to his fellow forwards. In possession he gave the ball away too much, being dispossessed 2.4 times per game, the 13th highest in the Premier League, and more than any other Chelsea player. As a result of this fans got on his back.

His goals dried up and when AVB was sacked Di Matteo changed to more of a 4-4-1-1 which require disciplined  wide men who were prepared to work hard off the ball and defend in a tactically astute manner that Sturridge couldn’t do and so he was sacrificed.

One must consider however that he scored as many goals in the Premier League as Torres and Drogba combined and thus his frustration at being left out for forwards who were not scoring goals is surely understandable as he was desperate to get the central role.

Well I believe firmly that he should stay. Chelsea fans need to remember the good work he did at the start of the season and remember that he is still young. Look at Liverpool, they spent a fortune bringing in young English players to little effect and we have a good English player here who whilst being a diamond in the rough has great potential.

Clearly to develop at Chelsea he must, must improve his attitude and accept that he has to be prepared to play a team game, if he does this with his speed, skill and dynamism he could be an impressive player for the club. It also cannot be understated how important English players are considering home grown rules and their over inflated fees.

With Hulk’s imminent arrival in what I suspect will be a 4-2-3-1 type shape for Chelsea next season competition for places will be tough. Hazard, Hulk, Mata, Malouda (if still at the club) as well as Sturridge could compete for the front 3 positions which could make it difficult. However, Hulk would also act as back up for Torres upfront and Sturridge’s versatility could still give him a role even if it does appear that RDM is not particularly keen on him.

All in all though Chelsea fans should have a bit more faith in Sturridge, yes he is frustrating but at times he has been brilliant and if he can improve his attitude he could be a top player for the club, if not we move him on. Possibly easier said than done, but we shall see.