Are Chelsea Flouting the FFP? 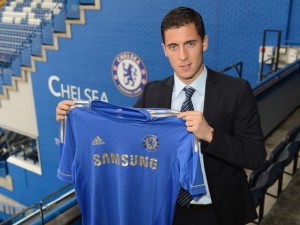 Chelsea have recently announced the signing of Eden Hazard from Lillie as well as reportedly being close to signing Hulk for nearly £35 million, add this to Hazard’s cost and the cost of Marko Marin Chelsea would have spent almost £80 million with further signings imminent. Chelsea have been linked with a host of other top stars including Gregory van der Wiel who will not come cheap which begs the question: are they flouting the FFP rules?

Chelsea recorded losses for last season were £67 million for last season of which £42 million were ‘exceptional items,’ which accounted for the hiring and firing of managerial staff. It remains to be seen whether these costs will be counted in the FFP; if not it takes Chelsea’s losses to £25 million. We must add to this a minimum of £11 million in ‘exceptional items’ for the sacking of AVB and his managerial staff taking the losses for this season to an estimated £36 million. Which would actually fit within the FFP rules, however it remains to be seen how expensive a new coach will be for Chelsea. The initial losses that FIFA will allow are €45 million.

Feasibly with the huge signings made by Chelsea they could find themselves some way outside of the threshold and thus fined and or banned by FIFA from competing in European competitions. Further to this it was recently reported that last season Chelsea had the highest wage bill in the Premier League for the 8th season running, although this did signify an 8% reduction on wages from the 09/10 season.

Ron Gourlay believes that winning the Champions League will provide a cash windfall for Chelsea that will finance the lavish spending spree Roman Abramovich has gone on, rather than it meaning the club are in convention of the FFP regulation. Gourlay believes it could make Chelsea ‘£100’s of millions.’ The victory will undoubtedly lead to increased revenue from prize money but more significantly from increased marketing opportunities abroad which Chelsea will now look to exploit.

By simply being in next season’s competition Chelsea will benefit hugely financially as new TV deals negotiated by UEFA mean participants will earn even more TV revenue than usual. With the pot said to at least double meaning the approximate €50 million Barcelona made winning the trophy last year will be about double for teams competing in the next TV cycle from 2012-13 to 2014-2015. The financial reward of Chelsea gaining entry to next season’s tournament is even greater than previously which actually makes their finances slightly more secure. For winning the title alone Chelsea will receive €31.5m without even considering market share pools which are as stated huge.

Chelsea’s attempts at breaking even

As well as this there has been a shift to reduce the wage budget for example with the release of several top earners which has translated into a drop in annual wages of £4.4 million, which as stated represented an 8% reduction in the wage bill whilst accounting for the signings of Luiz and Torres who were both on huge wages.

Hazard is going to earn a reported £170,000 a year and Hulk won’t be on a dissimilar wage which will probably push it up. To counter balance that Chelsea have began to release several key members of the first team. Anelka and Alex were relatively high earners and both were let go in January. Further to this Drogba, another top earner has left the club as have Bosingwa and Kalou who were to likely on more than modest wages.

A clear out is evidently under way, at least to an extent, and whilst Chelsea have indicated they will negotiate with Essien, Ferriera and Malouda one would expect them to either have to reduce their wages or be let go as Chelsea look to revamp the squad whilst, ideally, cutting costs. The contract negotiated with Cahill was also carefully done as it stalled for two weeks with Cahill wanting a higher wage, Chelsea appeared to hold out and offer a more modest wage to the player which indicates some willingness to rein in costs. The signing of Marin for a reported £8 million also indicated the club were being more prudent but that was prior to the Champions League victory.

The marketing opportunities created by winning the Champions League would add to recent marketing strategies adopted by Chelsea this season for example the linking up with Formula 1 team Sauber which would increase the profile of Chelsea outside of Europe, especially in Asia and Latin America where Formula 1 enjoys huge coverage.

Clearly the big money signings will add a huge cost onto Chelsea’s net outgoings which will need to be offset by Champions League revenue as well as cutting the wage bill. The marketing team at Chelsea has clearly been working hard for example on the Sauber deal and will need to continue to do this for the club to take advantage of the Champions League win.

On the face of it, it appears that the club are free spending in the aftermath of that victory either optimistic of the financial rewards of winning the Champions League or openly flouting the new regulation. The club though have made attempts to cut costs most notably in releasing several big earners over the last two seasons. Whoever Chelsea bring in to manage the club will cost the club substantially, unless Pep comes out of his hiatus as he would not cost a compensation fee due to being out of contract. Arguably this strengthens the case for giving Di Matteo the job as he would likely not demand huge wages and would also not cost a fee in compensation.

The biggest shame of Chelsea’s recent spending spree is that many of the young players in the squad will continue to see their development blocked by big money signings. Many Chelsea fans are eager to see the likes of McEachran and Lucas Piazon enjoy more first team football, but they may be left waiting for some time at this rate. Promoting youth would be the ultimate way for Chelsea to break even but for now the young players are clearly not deemed ready to break into the first team.