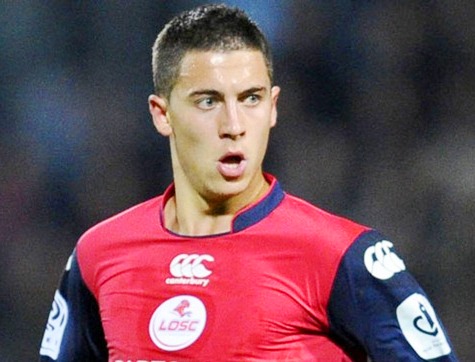 So, after the virtual ‘sit-in’ on twitter last week waiting for Eden Hazard’s promised tweet on his club of choice, we could be officially unveiling the 21 year old as a Chelsea player today.

Certainly, some reports point to that being the case, but then as we know not everything you read should be taken at face value.  Take the comic article from Simon Mullock in Mirror Football for example, I’m sure him and his colleagues sat around this morning having a good laugh that something written in 5 year old toddler tantrum style had actually got past the editor.  Not only did it smack of the green-eyed monster, but like all 5 year olds stamping their feet, it provided little in the way of validity to convince anyone to pay attention either.

You see, the sort of ‘sports opinion’ offered up by Mr Mullock was that “Hazard hardly got a kick – apart from a stamp on the ankle from new club-mate Cole that gave him a typically English welcome to London”, and yet he actually had 90 touches – 27 more than any England player on the pitch. He also attempted & completed more passes than any other  player. And as for “his only shot, a wild slash at the ball nine minutes from time” being “more of a threat to the corner flag than Joe Hart’s goal”, well again, Hazard had the most shots – with 2 on target and 2 wayward, as well as creating 6 chances, so this Ladies and Gentlemen, is probably the sort of ‘report’ that shouldn’t be taken at face value.

Read reports in the Guardian or Telegraph and you will hear Hazard “was, on occasions, a class apart from England” and that “technically, tactically with speed of thought and flight of foot, he provided numerous problems for his opponents.” Which of course, whether biased like myself or neutral, was the true version of events.  Not that he doesn’t have his critics when he plays internationally, of course, because it’s certainly been suggested he doesn’t perform as well for his country and he does his club although I hardly think that warrants a u-turn on Chelsea’s part – or the slating he got from Mr Mullock.

Ironic though that a sports writer who submits such an inaccurate account to print should be questioning whether Eden Hazard does his job properly.