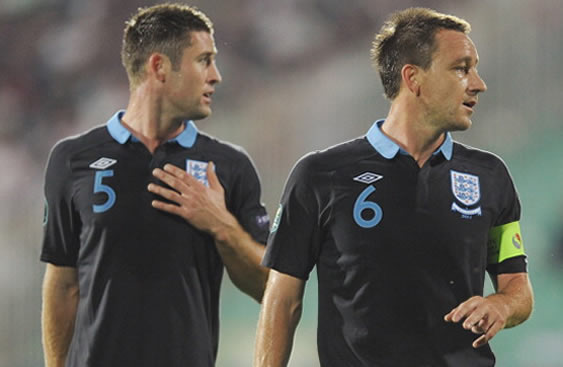 Two friendlies in, the Euros haven’t even started and our players seem to be dropping like flies. With Frank Lampard already out of the Euros altogether with a thigh injury, yesterday’s game saw both John Terry and Gary Cahill leave the field injured.

Gary Cahill sustained an, as yet, unspecified jaw injury after a cynical shove in the back from Dries Mertens saw him clatter into Joe Hart early in the first half. England manager Roy Hodgson was probably about as impressed as I was to see it although managed to contain his reaction a little better, saying  “I wasn’t too happy about it (the challenge). ‘Unfortunate’ is too kind a word.  When a striker is chasing a defender who is feeding a ball to the goalkeeper, those nudges and pushes take the defender into the goalkeeper.  It is something if you have been a goalkeeper you take very unkindly to.  The referee gave him a yellow card, which he deserved. Unfortunately for us, the consequences might be a lot more than a yellow card because a fracture is a distinct possibility.”

John Terry meanwhile, went off with a bit of a hamstring concern, although Hodgson seems a bit more optimistic about our captain, saying “I suppose there is a slight worry about John Terry.  We have worked quite hard this week and players are going to feel a bit tight in their muscles and he said he felt a slight tightening in his hamstring.  That doesn’t necessarily mean anything other than fatigue. But he will also have a scan tomorrow and I will have a definite answer after that.”

Should we wrap Cole in cotton wool just in case?

Thoughts on Torres & The Future
Hazard, No ‘Debate’ Necessary