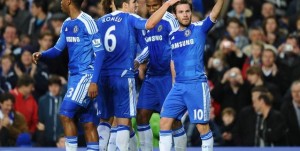 Watching our game against Wigan at the weekend, I was really disappointed. God knows why, because given our fixture list is as congested as the District Line on a Saturday afternoon and our starting XI is subject to more changes than Katie Price’s little black book lately, I appreciate we can’t expect to be blowing anyone away.  It was a little humbling though, not just because I had to accept it was the sort of performance so easily upstaged by a bird – and yes, I fully appreciate the gorgeousness of Eva Carneiro but even she seemed to be outshone by a pigeon on this occasion – but even more humbling that I unashamedly accepted our three points had come by way of not one but two offside goals.

Why would that bother me? Well, I used to hate that sort of thing. Y’know, the idea that we’d won by anything other than either sheer hard work or just lovely football? Things have changed though, not least of all my attitude and as I sat watching City choke again Sunday, the penny dropped for me – I’ve always had too much of a hang up about the money.

I’m not proud to admit it but the constant onslaught of ‘buying success’ accusations chipped away at me and on some level I actually bought into that. And whilst I celebrated as wholeheartedly as everyone else in May 2005, (who the hell wouldn’t want to see United taken down a peg or two?) there was always a tinge of uncertainty for me. Of course we were better than United at that point – something our second title under Roman consolidated – but would we have got there without the money?

Well, maybe we wouldn’t. I mean, we’d been competing in the top four before Roman but not realistically challenging for the title. So, clearly the money did give us the final step up we needed but that’s not to say it’s the only reason we won back-to-back titles. In fact, thanks to Manchester City, it’s now clear the titles, the trophies and everything else we’ve enjoyed in the last 7 or 8 years, haven’t come about solely because of the money.

You see if titles and trophies really can be bought, Manchester City would have easily replicated what we did. Yet at the end of the 2009-10 season ( a year after their inheritance) they failed to even qualify for the Champions League, finishing 5th in the Premier League in spite of spending in excess of £100 million.  2010-11 they finished 3rd having added massively to their squad and again this season, they’ll still fail to see the title at Eastlands in return for their £500 million outlay so far. Kind of dispels the myth a bit doesn’t it?

Of course, we’ll still hear the same old ‘can’t buy class’ shite leveled at us but then, anyone who really can’t now appreciate exactly what we’ve achieved over the past decade (money or not), either has absolutely no concept of what it really takes to have the sort of trophy haul we have in today’s game, or should probably Google the word class before they open their own crass mouths.

Anyway, that admission out of the way and back to our football this season.  It’s fair to say it hasn’t been the most attractive football we’ve ever played, so Samantha Brick’s ‘prettiest thing on earth’ title is safe (if you discount Arsenal of course) and we’ve had more than our fair share of dodgy results, but so what? The fact is, even playing what is probably some of our least attractive football for a few years – and we’re talking Chadwick-faced ugly at times – right now we’re still in the FA Cup, Champions League and fighting for a Champions League place (edit: albeit completely by the skin of our teeth if we do it after last night’s result). And given the utter shite we have thrown at us from some rivals, it’s amusing to look back at how long some of those lasted in the same competitions.

And before anyone wants to jump in here and remind me we could end this season with absolutely fuck all, I will just say this – if I could sit through relegation to the 2nd division, I’m damn sure I can put up with a season without Champions League football. It always has and always should be Chelsea we’re in this for, anything else supporting them brings us is a bonus.

The fact is, we might not be doing it in quite the way we’d like it but at least we’re honest about it. We didn’t play out a dire game at the weekend and after scraping a 1-0 win talk it up as if we’ve just played a blinder. Nor did we argue dodgy decisions helped us out, or worse still berate our players for getting us the points by foul means or fair. Nope, we were honest enough to admit we were bloody lucky but if the officials want to miss a couple of offsides, then fuck it, we’ll have it.

That’s what it’s about after all isn’t it? Fuck the moral battles some supporters want to have about who has the most ‘class’ (since the one’s usually spouting that have very little anyway), or who has had the most injuries during a season (yes United we know!) and even who can spend the least (usually equating to who can win the least over the past 7 seasons), because none of that is fuelled by passion anyway.  All that shit is just petty, pathetic point scoring off the pitch when what I’d rather have, is for our victories to come on the pitch – and to be brutally honest, I really couldn’t give two fucks how we get them anymore!