Chelsea: Out Of Fight Or Just Out Of Steam? 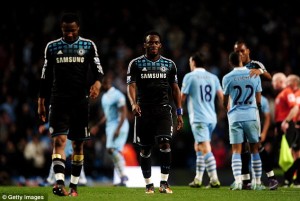 Bloody woeful again yesterday wasn’t it? As if it wasn’t bad enough having to digest a midweek performance against City as limp as Dale Winton’s wrist, we’re served up a dire derby against Spurs for afters. Weaker constitutions might have succumbed to spewing bile by now but as passion-fuelled as that may be, that’s not TheChelseaBlog way.

Instead, I’ll just sit rocking in a corner somewhere, crying a little about the “underlying long term decay at Chelsea because it’s based merely on the whims of one man rather than history and stability.” Or maybe not, because whilst yesterday’s game may well have had me sulking in silence, that’s exactly the sort of statement that will provoke me into a response.

Ah, history: “the past, background, previous experiences, etc., of a thing”; “a usually chronological record of events, as of the life or development of a people or institution”.  One of the most chewed up and spat out attempts at an insult there is when it comes to Chelsea – the lack of history. Founded in 1905, 4 titles, 6 FA Cups, 4 League Cups, Uefa cup winners twice and a few odds and sods thrown in. Looks pretty much like a record of events to me. Ok, it might not be in the realms of the United’s and the Liverpool’s, but it still reads like a ‘record of events’ in our development to me, so on to the next issue.

Roman Abramovich.  It’s something we have thrown at us all the time isn’t it? We’re just Roman’s plaything, a whim he’ll get bored of in time – and yet in spite of that, almost 9 years later he’s still with us. We’re not as shiny and new as we were when he arrived, we don’t make his eyes light up in excitement and there’s bigger boys showing off shinier toys now, but he hasn’t thrown us away and replaced us with the latest gadget yet.  In fact, whilst the Sheikh’s kid themselves their conkers are big enough and shiny enough to induce more than a few bruises on their neighbours, Roman still doesn’t appear to be throwing his scraggy-eared teddy out of his pram and walking off in a strop.

If anything, the Chelsea owner seems a little too fond of his collection. He might have about as much patience with managers as Liz Taylor had with husbands but when it comes to our players, he’s clearly aimed for stability – and therein lies our problem. Yet again this weekend, having watched us against Spurs, Gary Neville has hit the nail on the head, in fact when it comes to what’s going on at Chelsea this season, the former United player has made plenty of astute observations. Not that it’s rocket science that the core of our players aren’t getting any younger but rather than play the predictable ‘sack the manager’ card, he’s called it right.

You see, the one thing our games against City and Spurs have demonstrated quite clearly is that, as much as some might have wanted to believe at the time, this season’s woes weren’t about Andre Villas-Boas not being up to the task. The task wasn’t do-able in the first place. Nor was it about ‘player power’ – something I bought into at the time. I mean, let’s face it, whilst Frank Lampard openly admitted there were issues with our former manager, I hardly think he’d still be sulking about it now – and yet his performances against City and Spurs were no different to the performances that saw AVB bench him. Essien likewise and yet when these players were dropped, questions were asked of the manager rather than the players themselves.

Well, here’s a few questions the persistent wind-ups have thrown up this week – where’s the old Chelsea spirit we saw under Mourinho? Have we lost our fight? Are our players gutless? Toothless? And are we simply back where we were pre-Abramovich? I guess anyone wanting to take a dig could make any one of those claims, yesterday’s performance and result certainly added another nail to this season’s coffin and whilst (2009 aside) we’ve pretty much got used to finishing 1st or 2nd in the league since Roman’s arrival, rather than the usual sprint to the finish, the end of this season feels more like a trudge towards the hangman’s noose.

Have we gone backwards then? Well whilst our critics might suggest so given the state we’ve been in this season, they’ve probably forgotten that even as far back as the ’98 and ’99 seasons, we were managing top 4 finishes without Roman Abramovich, and indeed did so the season before his investment. So, if we were managing the Champions League then, why aren’t we doing it now? Simple, the players are neither gutless nor toothless, they are just bloody knackered. And by that I don’t mean they’re utter rubbish, they just can’t keep doing what they’ve been doing relentlessly anymore and as far as ‘fight’ goes, even Mike Tyson’s former backroom staff couldn’t get a knockout out of us now.

Under Jose Mourinho, Chelsea was like a machine, a well-oiled and well maintained machine. The trouble is, there’s no fuel left in the tank and whilst we might still aspire to line up in the Grand Prix, the engine we have right now is probably more suited to banger racing – not as sleek or well maintained as those around us anymore and quite frankly, not at the races.

Back in 2003, Roman didn’t just save Chelsea from disappearing into the footballing ethos that is administration, but he took what was already in existence – what was already lining up at the grid – and added what he needed to, to put us in pole position. (And before anyone jumps on the ‘he bought the titles’ bandwagon, take a look at City’s costs and returns so far).

In the short-term, Abramovich got it right. Right players, right manager, right results. What he’s missed though, is the on-going maintenance. So Gary Neville is quite right to suggest that players like Lampard, Essien, JT and Drogba are costing us this season. Under Jose Mourinho, they may well have performed in the big games every few days – not because he was a better manager or because they had  more motivation but because they had the legs for it. Yes, we might still have it in us to pull off the odd ‘Napoli’ but we can’t do that consistently and once we have done it, we’ll pay the price.

Roberto Di Matteo’s first four games might have given us the belief that the ‘new manager’ syndrome could carry us through for a while but the players’ legs clearly have other ideas. It was a bloody good set of results for sure but the physical effects are already evident and with a trip to Lisbon on Tuesday, swiftly followed by Villa next weekend, we need to be realistic about the sort of performances we can expect going forward.