AVB Suffering For Past Mistakes? 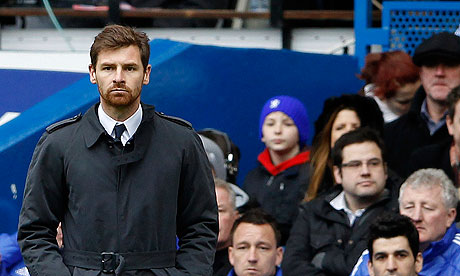 I was watching some old Chelsea videos at the weekend – well let’s face it, it was preferable to our highlights against Birmingham wasn’t it?

With everything that’s going on at the club right now, particularly the pressure AVB is under and the (mis)reported chants for the return of Mourinho, there’s definitely a feel that some of us are harping after the past, so, true to that form I revisited our relegation back to the second division in ’88 (because I’m obviously sadistic) and ended the evening with some old favourites from 1997 through to 2005.

Needless to say, the Middlesbrough game didn’t do much to pull my mood out of my boots but it did serve as a reminder of how it felt to be really gutted over games. Mind you, talking of ‘gutted’ I’ve still never once watched any footage from Moscow because whilst I might have a minor sadistic streak running through me, in spite of what I may say during some games, that streak doesn’t stretch to genuinely suicidal. But then that’s clearly a mark of how things have changed in terms of expectations isn’t it? Why is it I can watch us being relegated but still can’t stomach seeing us play in the Champions League final? Did I catch the dreaded ‘spoilt brat syndrome’?

I guess it could just be a case of time healing? Although if that was really true, the videos I watched of Gianfranco Zola’s last game wouldn’t still reduce me to tears would they? But then there’s never been a player for me at Chelsea either before or since who will have quite the impact on me that Zola did. He had everything I’d expect from a Chelsea player – more than I’d expect probably – and it rubbed off.

Watching back the videos this weekend was pretty humbling really. Yet again, oppositional tweets told me Zola was “too good for the 4th biggest club in London” but of course, that sort of thing just feeds the smugness that it was us he chose to play for. As for him being “a poor man’s Cantona”, they can keep Cantona and his karate kicks because I’d rather the little magician to Cantona’s arrogant brilliance (or brilliant arrogance) hands down.

Zola signalled a new era for us – an era where we were entertained by the likes of Vialli, Desailly, Di Matteo, Le Saux – great players, solid players, players unquestionably deserving of the shirt on their backs. Of course they didn’t win every game – we were still a way off titles then – but it wasn’t through lack of effort. Can you imagine Dennis Wise walking off the pitch after a 1-1 draw with such nonchalance if he’d played for us on Saturday? Of course he wouldn’t, he’d have been more likely to walk off bollocking everyone around him.  He loved everything about the club and could never have shrugged off letting himself or the supporters down even for 90 minutes, nevermind for weeks on end.

Yes, we had our critics even then for bringing in older players who’d end their careers with us but as long as they were playing, they were giving it their all. And when we needed to, we were bringing in the likes of Jimmy Floyd, Eidur Gudjohnsen and even (god forbid) bringing through John Terry because as brilliant as the players were, they couldn’t go on forever. And we reaped the rewards along the way, not just in terms of silverware but in the sheer pleasure of watching them earn it.

Of course, when players like Lampard, Makelele, Drogba, Essien, Cech, Duff, Robben, Terry et al graced our squad we inevitably moved up a step and along with some stunning football at times, came the titles – good times indeed. Ok, so it had taken Roman’s rubles to make the final step but we were furnished with the best footballing talent money could buy, they were out there wearing the shirt, winning for us week in week out and all was well with the world……until it stopped.

So what happened? Jose’s departure? I mean, if we’re going to hanker after the good times, he’s the reason they happened isn’t he? Well, considering us reaching our first ever Champions League final came after he’d left, that one remains debatable. Was it the final itself? Think about it, we might have won the double under Carlo Ancelotti (which could of course be used to negate this theory) but realistically, how much of our once trademark ‘fighing spirit’ have our players genuinely shown since Moscow?

In the season following Jose’s departure, our players rallied. They were full of that ‘us against the world’ spirit they’d acquired under Mourinho. Be it the injustice of his leaving or the even worse injustice of having Avram Grant ‘managing’ them, they worked their arses off as a team – particularly that night in Moscow (bloody word still makes me cringe). So did they run out of fight or just run out of steam?

My guess is the latter. You see, that time for me, would have been the perfect time for a manager to take a look at a squad that had fought its arse off season after season and realised, like our other squads before it, it couldn’t go on forever. We were never going to get the same value out of the squad after that – not because the game itself had devastated them (although mentally it won’t have helped) – but because physically, some of them had already given us the best we were going to get from them.

Of course, as I’ve said there’ll be those who would argue the 2009/10 double but realistically, we were probably fortunate not to have faced such tough opposition for that one as we had before and since – and given the opposition we have around us now, we won’t get that lucky again.

Looking back, during a ten year period from 1996 onwards, the one thing we did consistently as we became increasingly successful, is freshen up the squad. That’s not to say we didn’t slip back in the table here and there, but the team and our football was still making progress. That doesn’t seem to have happened in quite such a significant way since then – and yet some 5 years on, the current manager is taking the blame for Chelsea’s woes.