Is Torres Feeling The Love? 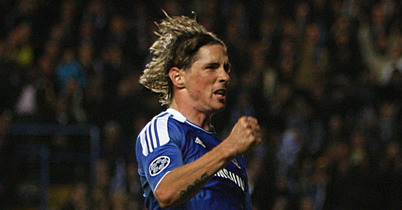 I was in a cab when I heard we’d signed Andriy Shevchenko. I remember it because I’d been saying for two seasons we should sign him.  I remember how I took the absolute piss out of the other passenger in the cab with me – a Milan fan who’d sworn all along Shevchenko would never leave AC.  More than that though, I remember how it felt – I can even imagine the look on my face when it came through on the radio.  I’d seen plenty of what Sheva could do and been to the San Siro enough times myself to know what an important player he was – and suddenly he was a Chelsea player – bloody overjoyed just doesn’t cover it.

Needless to say then, I was gutted the way his spell at Chelsea went.  In fact, the longer it went on, the more painful it got. For those who know anything aout the 7 stages of grief, well that was me, I did the lot.  From doing my best ostrich impression, through arguing with everyone around me (except the big man upstairs, who of course I was still bargaining with by way of a few Hail Mary’s), right up to downright sulking. I held off the acceptance bit, right up until I realised it was more cruel for us to keep him.

Sort of a standing joke for us though really – Stamford Bridge is where strikers come to ‘end’ their careers. Shevchenko certainly wasn’t the first player whose goals seemed to dry up the minute he pulled on a Chelsea shirt (he was just the most expensive) and he wasn’t to be the last either…..

A couple of years and an extra £20million later, Step up Fernando Torres.

Similarly to Shevchenko’s signing, I remember where I was when our £50million signing was announced – mainly because I’d hardly left the room during the transfer window. Glued to SkySports and the internet, I spent the whole night dreading another ‘Robinho’ fiasco, crossing my fingers whilst frantically updating the blog, being wound up by an opposition supporter on msn, whilst trying, in turn, to wind up as many scousers as was humanly possibly in a day.

And then, whilst not in the realms of Shevchenko (mainly because he’d come from Liverpool so not a player I’d ever particularly cared for), I still remember how I felt.  Not elation exactly but close enough to feel a bit smug. We’d got our ‘big’ signing. After the embarrassment of Robinho (little did we know!) and the utter disappointment of United getting Berbatov – it was our turn – and I knew they didn’t like it.

You see, not only had we just signed Fernando Torres – whose career of course, we were going to resurrect – but we had the strike force of Didier Drogba and Torres combined! Imagine that! Of course it made the opposition unhappy, but whilst they were left pretty deflated from that particular transfer window, Stamford Bridge was awash with happiness – and ‘awash’ is certainly an apt description considering the hard-ons it undoubtedly induced.  Unfortunately for us though, this isn’t something that’s been reciprocated so far because, over the last 12 months, the only thing stiff about Fernando Torres has been his ability to finish.

Similarly to Shevchenko, I’ve refused to believe Torres needs to go and right before the United game, I was still at the point where I could only see his every move through blue-tinted glasses. Even on the tube, I almost accepted someone’s “but how many does he set-up?” argument. And to an extent, whilst I mentioned the minor issue of us not paying £50million for him to ‘set them up’, I wasn’t about to labour the point.

Watching it back again later though, I’d have needed more than tinted shades to miss his lack of confidence. The Reds must have been expecting the inevitable when the golden opportunity presented itself to our Spanish striker. I mean, he ‘loves’ scoring against them right? Enough of them said it before the game – except, that was then and this is now – because, as we know to our cost, he let the opportunity go begging.

So, what’s the difference between then and now – apart from a shitload of goals? Well, similarly to Shevchenko, Fernando Torres came to us at a time when he wasn’t in the best of form anyway. An injury before the end of a decent 2009/10 season for Liverpool meant he needed a spell out – but like too many players, he returned from that prematurely for international duty and has never returned to his best since.

Having come to us under those circumstances and then failed to set the world alight immediately, the pressure in the press inevitably started – but was it just from the press?

If he has major concerns, Chelsea manager Andre Villas-Boas hides it well in the press, insisting he is happy enough with the rest of Nando’s game. Like the Jose Mourinho situation with Sheva though, Torres was not a major signing of choice for AVB – he was inherited (albeit before his arrival on this occasion), so not the ideal way to feel wanted.

Then there’s the rest of the squad. Yesterday, TheChelseaBlog looked at the impact ‘player power’ could be having at the club and you’d have to think this sort of thing could come into play with new signings. Our ‘senior’ players have been at the club a fair while and it wouldn’t be unheard of for these ‘old-timers’ to have an opinion on such a significant signing. Certainly 6 months or more ago, there was the odd whisper about a ‘bust-up’ in training – I don’t recall reading it in the press at the time – although rumour had it there was an alleged row between Nando and another senior player who may, or may not have felt his place under threat. Surely if this sort of thing is more than a rumour, it has to unsettle a player like Nando?  Similar to Shevchenko, feeling almost the outsider trying to play your way in has to have an impact – even worse if you’re made to feel as isolated on the pitch as you feel off it? How often have we questioned the lack of service he gets for example?

Maybe all this hearsay is just clutching at that ‘denial’ straw again though and maybe the bust-up was a one-off borne out of the frustration of his barren spell rather than being its route cause? Well, whichever it is, at the time, the rumour was that the Spanish striker was more than capable of standing up for himself off the pitch…………..now its just a question of whether he’ll ever start doing that on it?

Chelsea Concerns: From Boardroom To Pitch
Anyone Not Got The Knives Out For AVB?