Chelsea Concerns: From Boardroom To Pitch 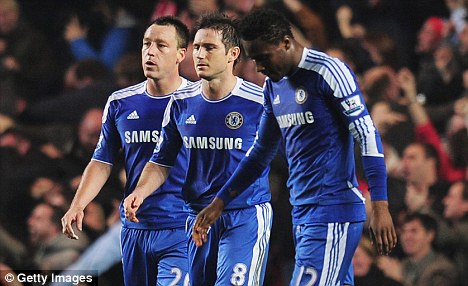 When it’s supporters rather than the press calling for the Chelsea manager’s head, you know he’s in trouble.  Mind you, let’s not pretend the press hadn’t already sown the seed, they had, months ago and now it seems that following our first defeat of 2012, the ‘AVB out’ campaign is in full swing.

It’s a shame really, not just because for years we’ve cried out for a younger manager who might actually be around longer than the customary season or two but because we never learn.  I mean, this is hardly a new situation for us is it? In fact, the end of Chelsea’s relationship with their  manager is now as routine as Katie Price’s with her latest boyfriend – although to be fair, the warnings probably haven’t been signposted on a yearly basis for her conquests.

It’s something we’ve seen most seasons for decades and yet we’ve never really been able to put our finger on the problem enough to solve it. Instead, what we do is whack a plaster on when the cracks appear and somehow just about manage to hold it together.  At times, we’ve done this better than others but then, that may have been the difference between pulling an elastoplast dressing out of our first-aid kit and a tesco value plaster from the bottom of a handbag.  Either way, both are temporary solutions and the cracks inevitably reappear.

For those of you on twitter, like me, you’ve probably noticed that in between a lot of the crap you read, there’ll be one or two really sound tweets – and that’s been the case over the weekend.  Surprisingly enough, amongst all the ‘Suarez is a racist’ and ‘Dalglish is an arse’ tweets, following our defeat to Everton, there were quite a few about Chelsea. Ok, so the vast majority still seem to want a superficial solution, with AVB either being sacked or taken out the back of Stamford Bridge and beaten with a stick but there was the occasional tweet that delved a bit deeper.

Naturally, there were several that pissed me right off, with suggestions ranging from us being “almost obsolete….. like a Shakespearian Tragi-comedy” to our current position in the Premier League being “a right result for a medium sized club”.  It’s not what you want to hear about your club really is it? And the proud and indignant Chelsea supporter in me wants to immediately argue against those claims.  Of course we’re not ‘obselete’, ok so we’re sitting outside the top 4 but we’re still in both the FA Cup and Champions League – unlike some of the clubs above us.  And it’s been ten years since we’ve settled for a place outside the top 4, so we won’t be going back there will we? Well my guess is that it all depends on how the club plan to dress our current wounds.

Do we label AVB the ‘scab’, get rid and grab ourselves the nearest plaster now? Or maybe just bury our heads in the sand, hoping the cracks don’t get any wider and assess the damage in the summer? Here’s a novel idea though, how about everyone at the club leaves the ‘scab’ alone, stops picking at it and accepts nothing short of minor surgery is going to fix things anymore? Or in other words, stop making a succession of manager’s the scapegoats and look at the ‘infection’ setting in from the boardroom to the pitch.

You see, as far as I can tell, Chelsea just don’t respect their managers.  Of course, they say all the right things when they bring them in: “Andre was the outstanding candidate for the job. He is one of the most talented young managers in football today,” “Carlo was the outstanding candidate for the job.  He has proved over a long period his ability to build teams that challenged for, and have been successful in, major domestic and European competitions,” “The appointment of Jose Mourinho is all about building on the foundations which we have already established at Chelsea. He represents the new generation of football coaches and we are convinced he can take us to the next level, both in England in Europe. His record of sustained success makes him perfect for what we want to achieve at Chelsea,” but that’s just lip-service.

Up as far as Mourinho, it seemed to be interference from the board (and Roman himself) causing the biggest problems, highlighted at the time with the signings of Andre Shevchenko and Michael Ballack.  However, when it came to Jose’s departure, it became apparent that this lack of respect for managers had seeped into the dressing room as well.

At the time, I remember reading about JT’s alleged part in Mourinho’s departure and refused to believe any of it although the fact the claims appear to have been supported by former player Claude Makelele would suggest there has to be something in it.  Michael Ballack certainly saw that as being the case during his time with us as well and to be perfectly honest, Avram Grant highlights the point even better because if he really had, had any say in things, we wouldn’t have got as far as Milton Keynes under him nevermind Moscow. Scolari was another one who came out suggesting he wasn’t given the freedom to make his own decisions at the club, although to be fair, that was probably a blessing as it turned out but it still shows all too well that Chelsea managers are the ones being managed – by everyone around them.

And if you look at what’s happening at Chelsea right now, you’d have to think it’s a problem that’s been allowed to get worse.  Take the weekend’s defeat against Everton, what I could see was a bunch (and I say bunch rather than team) of players going through the motions of a game with about as much interest as a bored housewife trudging round Tesco – although to be fair to housewives, even they put in the required effort to get the job done. And yet, it’s the man on the touchline taking all the stick.

Like every manager before him though, he’s damned if he does and damned if he doesn’t because we all know he’s already at a disadvantage.  He didn’t pick up a squad furnished with the sort of players Mourinho did, nor does his experience in management so far afford him the ear of the players a manager like Carlo Ancelotti might have had, his every move is scrutinised by the press and already, it seems he’s being handed players in transfer markets of the club’s choice- if his comments about Kevin de Bruyne are to be taken at face value.  So what can he really do of any impact that won’t be used against him if it backfires?

Well, he could drop some of the players showing poorer form – fair point – but as far as I can see, he’s already tried doing that at various points in the season, yet things have got progressively worse.  Wasn’t Malouda crying to the press at Christmas because he’d only had 4 starts by then? And what about Frank Lampard, how impressed was he when AVB had the balls to drop him from the starting line-up? The fact is, AVB did have the bottle to make that decision and naturally it was questioned.  He stood up to that though. In fact at one point, he was arguing bad decisions by refs, he was standing up to the press, he had fire in his belly –  and then out of nowhere, the fire went out. The question is, why? Or maybe more to the point who? As in, who might have been pointing the extinguisher at him?

Players unavailable either through injury or ACON duty have limited his ability to change things on the pitch and the circus surrounding him over John Terry is probably just another distraction he could do without but whilst during the Mourinho era, whether on or off the pitch, players were prepared to pull together as a team and fight for the boss, there’s been no sign of that fight from our players lately.   In fact, something quite notable from this weekend I thought, was the Chelsea captain being reported to have gone away for the weekend rather than be there to support his team.

The ultimate vote of no confidence maybe? Or just the usual lack of respect for a manager? For me it sums up where the rot has set in at the club – and no amount of plasters are going to fix that.

Everton vs CHELSEA: Preview
Is Torres Feeling The Love?