The Fabio & JT Saga And The Return Of Santa 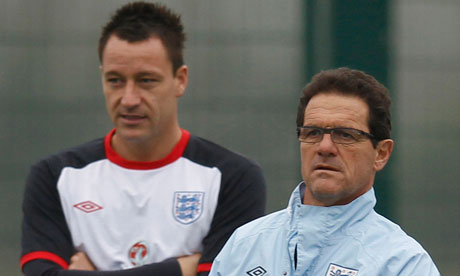 So, whilst we keep reading how the delay in John Terry’s trial (requested by Chelsea chief executive Ron Gourlay) is what forced the FA to step him down as captain, Andre Villas Boas insists “It was a court decision in the end. We had our preference of course, but I am not sure if it was that preference that made an impact on the court’s decision to delay the case. Whatever the consequences of events that ran after, we had nothing to do with it.”

The press of course, along with their following flock, will continue to push the theory that rather than have JT lead the team out for the Euros with a trial still pending, the FA had no choice but to undermine the England manager and sack his captain.  Yet, the irony is that whilst they beat us over the head with suggestions that Chelsea managers bow to the pressure of their boss and have no mind of their own, what the FA constantly do is pretty much the same – in that their actions repeatedly come as a result of pressure from journalists. So, just as they did when JT messed about with a team-mates ex, the FA responded the same way to this witch-hunt in the press and unsurprisingly, given their actions and the coverage that followed, had another boss walk.

Mind you, if you ignore the flood of congratulatory back-slapping tweets for a job well done, you might still believe that Santa Claus exists it was all Chelsea’s fault.

The Untouchables II: Not In Their Back-Yard
Villas-Boas: We Never Underestimate Everton