The Untouchables II: Not In Their Back-Yard 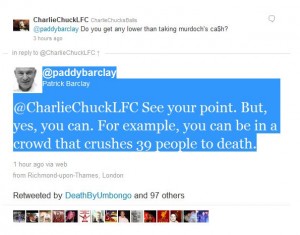 After days on end of having to read about why JT shouldn’t even play for England again, nevermind captain them, followed by the judgement from on high about Chelsea fans’ alleged racist booing of Rio Ferdinand at the weekend, I sat down last night to put a bit of a rant together on here by way of response.

I know I’m not the only one who’s been totally sick of Billy Smart’s gang following us around this season.  No sooner were they done trying to wind AVB up, than the circus rolled back into town on the JT racism bandwagon – and it had all got a bit tedious.

The thing about journo’s in this country is, they love to build people up just for the fun of knocking them down again.  Whether collectively as club’s or individually in the case of manager’s and players,it seems to be celebrated amongst the press a damn sight more than our national sport does – and as TheChelseaBlog pointed out last year, they still seem to think this should go unchallenged.

Take the weekend for example, at home to United and predictably a pretty vocal affair. Was I surprised to hear Rio Ferdinand royally booed? No, but then was anyone? He’s hardly one of the games most modest characters is he? Well, apparently plenty of other people were surprised to hear him booed, stunned even, given the furore it seemed to provoke.

In fact, in The Mirror, we had a one man crusade insisting “Let’s not pretend this isn’t happening. Let’s not pretend it was just an isolated incident.  Let’s not ignore the fact that a trend is re-establishing itself in English football, a deeply depressing, sinister trend.” Stirring stuff eh? Although probably not quite as ‘stirring’ as the tweets later, questioning why Rio was booed, suggesting “they’re booing a bloke over a case of racial abuse”.

So, irrespective of some of our own players being booed at the grounds of our rivals, when it happens at Stamford Bridge, the motivation must be racist because the press tell everyone it is – and they wouldn’t just try and stir things up for us would they? No, of course they wouldn’t, because that would mean we’d see things like this come up on twitter timelines “Well done Rio staying focused the booing of him is outrageous”. I mean, we know Ashley Cole, for example has never experienced anything like it, right? Mind you, I’m not sure he’d ever be pushed so relentlessly on twitter to backstab an England team-mate.

Yet it’s all about the shame our players bring on this country’s game isn’t it? Or the embarrassment supporters bring on clubs? We know all this because the press tell us it continually.  These fine, upstanding paragons of virtue, who have certainly stood in judgement of our club and our captain tell us, and anyone else who will listen, how abhorrent it is when something is said or done that strays outside the boundaries of acceptable behaviour.

Imagine then, sitting there reading a few random posts on Twitter and coming across one of these crusaders of morality replying to the question “Do you get any lower than taking Murdoch’s cash?” with the response “yes, you can. For example, you can be in a crowd that crushes 39 people to death.” I mean, can you imagine the reaction a player would get for saying that? You’d expect the vultures to have finished the carcass off within seconds really wouldn’t you?

So why was my timeline like the Mary Celeste as far as the Band of Brothers was concerned? Maybe because a remark had been taken out of context and the ensuing witch-hunt felt a little uncomfortable?

Chelsea v United: A Chat With The Enemy
The Fabio & JT Saga And The Return Of Santa