CHELSEA vs United: View From The Enemy 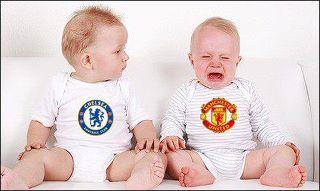 Ahead of our game against United, TheChelseaBlog  has had a chat with Twitter’s answer to Laurel and Hardy – Red bloggers – Dale from StrettyNews and David from The United Religion.  Have a read of their thoughts on Webb’s return to the side, dodgy keeper’s and United’s bruise count….

TheChelseaBlog: I think I’ve heard United have the odd injury or two, will this have a bearing on the game?

StrettyNews: I hope not. If you watched our 2-1 defeat against Liverpool, in the FA Cup, you would have noticed how we were the better team despite being without the likes of Rooney, Nani, Jones and Ferdinand. However, some of the players on our injury list are due back in time for the game on Sunday which will make it even easier.

TheUnitedReligion: Let’s hope not. We’ve had far too many injuries this season but, for the most part, we’ve coped well enough to be level at the top of the standings after 23 games. I commend Ferguson for coming out and saying before the Stoke game that he won’t use that as an excuse. You accept it and move on but, that said, we’ve faired a lot better than your lot has or would! Everyone has always said that individual players don’t win championship, but the same is true about teams now – because squads are what does. Even with all the players out, Manchester United has a very capable squad filled with players who can win games on their own!

TCB: You’d say that with David de Gea on the teamsheet? Any worries about him by the way?

SN: No, not really. David de Gea is only 21-years-old and it’s his first season in England. Some players take longer to adjust in different leagues but I’m confident that the journos that claimed he was a flop will be eating their words very soon.

TUR: None at all. Listen, David de Gea is a great young goalkeeper, which you should know all about, as he made two point blank saves at Old Trafford to win that game! He’s made some tremendous saves in big games – one or two with his face – and he’s made a few mistakes – I’m over them and so should he! I’m much more comfortable with de Gea, Amos or Lindegaard – because only God knows who really is first choice in Ferguson’s mind – than you are with Hilarious if Cech goes down! Right or wrong?

TCB: Well, we’ve always got Turnball I suppose! What we don’t have is the luxury of a player like Webb. You must be delighted he’s back in the side?

SN: Typical nonsense coming from a Chelsea fan. Webb has favoured the ‘rent boys’ more than enough in the past, but your supporters seem very forgetful – Ronaldo’s disallowed goal in 2009, a stone wall penalty ignored when Carvalho brought Robbie Keane down inside the box, and another penalty ignored when Mikel took Agbonlahor down inside the box. The list goes on, so stop ignoring it.

TUR: Funny that you say that – and unsurprising as well! Despite what people think, Webb has been anything but pro-United this season. If anything, he’s been the opposite. Let’s face it, he’s no Martin Atkinson, yeah? On a side note, I heard the other day that we haven’t had Atkinson referee one of our games since he gifted you three points last March. But, back to Webb, he’s the best referee in England and he helped City to all three points against Tottenham – how can he be a Red!?

TCB: Glad I didn’t hit a nerve with Webb, is it true he gets more games than Berbatov though?

TUR: Do you not remember the Berbatov quote from when he joined United? He’s one of the classiest footballers you will ever met – and that’s before you watch what he does on the football pitch. In my opinion, there isn’t a player with a better touch in England – maybe Europe. He’s deceptively strong and wrongfully labelled as lazy. If I was him, I would have told Ferguson to go pound sand after the European Final – but he didn’t!

TCB: Definitely a good player to hold on to but who do you think is your best player right now?

SN: Tough one to answer. Lots of players have put in good shifts this season but in January (last month) Antonio Valencia was immense. An old fashioned winger with a proper direct style of play. I’m really looking forward to seeing him make shit of whoever AVB plays at left back with Cashley suspended.

TUR: Michael Carrick. Being a fan-boy of his, I love being able to answer that unbiased, as well. Since he has come back from injury in early November, he has been a mainstay in the side and by far our most consistent player. His passing, his interceptions – and his goals have been a blessing in disguise. But I don’t need to explain how good he has been because Frank still has fuzz on his head from being in Carrick’s pocket from European quarterfinals last season!

TCB: Do you think the transfer window slipped Fergie’s mind?

SN: Ferguson rarely buys players for the sake of it. Maybe the players he had in mind weren’t available. Although, I’d be gutted if we rushed into business spending the likes of £50m on some striker that doesn’t perform to what’s half expected. Saying that, Torres wasn’t even playing well for Liverpool before Chelsea wasted money on him.

TUR: Not at all. Most people forget that he pulled off – or fell into his lap – the best-ever bargain in a January transfer window – Paul Scholes. We nearly nicked Frank off you too! If anything, I have learned to always trust Sir Alex – no matter what.

TCB: Talking of the old man, you looking forward to Mourinho replacing him?

TCB: All good things come to an end though, what you reckon David?

TUR: Absolutely. I think that there are only a handful of managers who could manage Manchester United in the world – and he tops that list for me. Most United fans don’t rate him because of him leaving Chelsea, Inter and, allegedly, Real Madrid after just a few seasons. He’s already stated his admiration for Ferguson and the United job so I think it’s a match made in Sir Matt Busby’s heaven.

TCB: Obviously we’re still playing with TSO’s team, is there anyone left in the side to worry United?

TUR: Glad you didn’t say fear. The one player you always have to watch at Chelsea is Frank Lampard – but he was at Stamford Bridge before Mourinho. So the TSO signings would have to be Michael Essien and Drogba. Both are two quality players – who would have been dynamite for United.

TCB: It’s not looking like we’ll be having a late run for the title, so as predicted, it’s all about Manchester this season. You worried City will win it?

SN: City have been slacking ever since the start of December, showing their true colours. If we beat you on Sunday and Liverpool the following weekend, I’ll be very confident of us picking up number 20.

TUR: It’s always about Manchester, isn’t it!? The only difference between this season and the previous ones is that there are now two clubs from Manchester included in that discussion. City got cocky the other night and if they don’t learn from that, they’re title challenge could crack. A lot of people are dismissing Spurs, but I haven’t and won’t – especially with them bolstering their side on deadline day! By the way, don’t try your mind game, because your lot could get a couple more generous gifts from referees and go on a run like you’ve done before. I won’t write off anybody – including the Arsenal baby bottlers – until they are mathematically eliminated from contention.

TCB: I think we’ve sent Atkinson on loan so I won’t hold my breath for a title run anytime soon.

Finally, give us your prediction for the game.

TUR: 3-1 United – of course. Valencia is going to have a field day – and Welbeck is going to embarrass your center-backs. Sturridge, who I quite like as a player, might get one if he has one of those theater moments again! This game has Torres’ name stamped all over it.

TCB: Not sure whether that sounds a good or a bad thing! Cheers lads, always a pleasure.