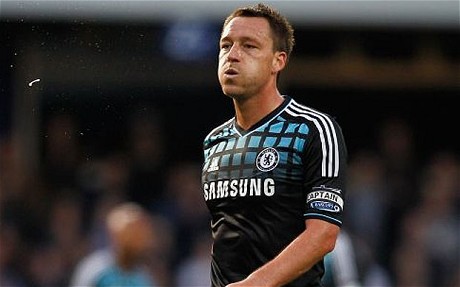 Ahead of tonight’s game – and the start of John Terry’s court case tomorrow – Swansea boss Brendan Rodgers has spoken in glowing terms of the Chelsea captain.

Clearly, Terry is someone Rodgers knows well from his time with us as reserve and youth team coach and he insists “He is a strong personality, John is a good man and from my time knowing him, and what he is being talked about in terms of the charges against him, I can safely say in my period of time working with him that he is not a racist, if that’s what he’s been pointed the finger as being.

I have absolutely great confidence that is the case. He has been a wonderful leader for Chelsea and I have known him off the field as well and the number of players he helped evolve, dealing with ethnic minorities young and old, it was during the time I was there and I witnessed it, so I would say that is not the case with John.

He is a public figure, he is the national captain and there have been a number of incidents that have drawn him to the publicity.  But from my own experience he is a great man, off the field I had a terrific relationship with him through good and bad times, it wasn’t always all smiles. I was able to speak my mind with him at times and tell him how I felt and I am sure he would say the same thing.

I always found his communication open. He is a lover of football and he is happiest when he is on the field or with his family, and I have nothing but high praise for him as in that period when I was there he was a real icon for the football club on and off the field. I found him a terrific man.  From my experience of knowing him quite well over that period of time I would say he is not a racist.”

Clearly then, Rodgers thinks highly of Terry, as do not just our supporters but plenty of other people in the footballing world, but the Chelsea captain is still a bit of a hard one to work out really.  I mean, it’s a debate I got into again at the weekend and whilst the Chelsea supporter in me feels I should probably give him the full-on support he merits for the service he gives us on the pitch, my head can’t ignore the less pleasant side of his character. And yet, even that doesn’t ever seem as clear-cut as my anally organised mind would like it to be.

From your average Chelsea supporter’s point of view, he’s ‘Mr Chelsea’, our ‘Captain, Leader, Legend’ – something celebrated rather than derided.  He’s self-assured and in charge on the field, never shies away from a challenge – a captain everyone can look up to. He’s the England captain with blue blood coursing through his veins and he sweats blood and tears for the club – literally!

On the other hand, we have the caricature JT – the version the opposition love to hate – the arrogant fucker who gets away with more than his share of dodgy tackles. ‘Mr Chelsea’, the ‘Captain. Leader, Legend’ – or whatever words they’d use to fill in that particular banner.  He’ll take your missus – or your England captaincy – simply because he can and of course, there’s the alleged racism.  None of that pleasant, although with the exception of the racism slur, nothing that hasn’t happened with other players.

Whilst I see both sides of the argument, in that, as a captain and a servant to Chelsea no-one can argue Terry has been outstanding, a genuine leader, yet as far as the off-the-pitch stuff goes we could well do without the negativity he seems to surround himself (and therefore the club) with – the bit that doesn’t fit neatly into either side for me, is the unquestionably nicer side of him that rarely (if ever) gets reported.

For instance, I know how good he is to younger players – and their families – but it’s not something he’d feel the need to make public. I guess to him, it’s just part and parcel of the position he holds at the club, but for me, it shows he cares about the club and its future players, not just himself and the here and now.  Yet, if he was the arsehole he’s painted out to be – the arrogant twat who believes he’s bigger than the club – then surely he’d want to sell that side of himself?

Then there’s the other stuff you hear about how he is with supporters. Like, bumping into kids in Chelsea shirts and going and buying a pen because they want his autograph but don’t have a pen with them. Small stuff maybe but still significant to those kids and another example of his very human side and yet it doesn’t fit in with a lot of the other stuff. And this is where my debate at the weekend left me – wondering why, when he clearly is a very decent person in so many ways, he somehow gets himself into situations where his character is called into question?

Is it because he is the caricature he’s been portrayed as? The nasty racist some would like to believe he is? Or is he just a bit of a pillock sometimes but human nonetheless? For me, it’s the latter although in the inevitable hysteria we’ll see whipped up once his court case opens tomorrow, he’ll no doubt be cast in the role of pantomime villain and any good he may or may not ever have done will be completely irrelevant.

Swansea vs CHELSEA: Stats & Predictions
Is The Real Issue Fernando Or Formation?