JT: Last Of The ‘Untouchables’? 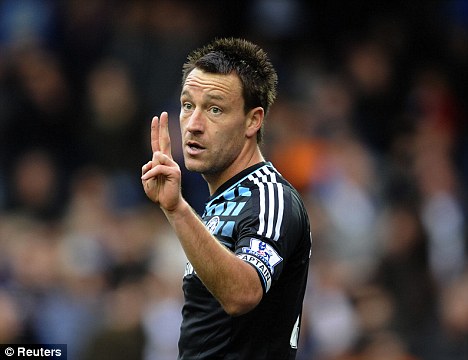 John Terry – ‘Captain, Leader, Legend’ – a description regally displayed by the home support and royally piss-taken by the opposition. Not that the Stamford Bridge faithful could care less, after all, he’s Mr Chelsea isn’t he? The fact he lives and breathes the club makes him untouchable, right?

Well, that’s a lot more debatable lately than it might have been before. For a start, whilst the club continue to support him over the racism allegations – and rightly so since he is still innocent unless proven guilty – we can only wonder what action the club might take should the outcome of that put JT and thus, the club, in a bad light. And whilst the idea of them as much as slapping his wrist in the past, nevermind considering the ‘unthinkable’ would never even be up for discussion, his impact on a game in terms of performance won’t afford him divine mercy from those on high much longer either.

Not that TheChelseaBlog has ever shied away from considering a JT departure in the past anyway but it goes without saying at Chelsea, that the mere mention of it brought plenty wanting to argue against it.  Are there quite as many refusing to even contemplate the idea now? Maybe not.

Certainly when City wanted our captain, I wouldn’t have been happy to see him go. I was pretty pissed off at the time he took to turn them down but his influence at that time would have been too big a miss for us.  Mind you, as if that didn’t create enough drama, since then we’ve had to contend with stories about his stadium tours on-the-side (not to mention even grubbier women on-the-side), his dad’s sideline in drugs, the whole England captaincy fiasco – and now allegations of racism.

Of course, you could argue that none of these things have anything to do with his game itself but mud sticks – and it all gets very messy, not just for the player himself but the whole club.  When the whole Wayne Bridge saga was going on, John Terry was clearly affected and as a consequence, so were our performances as a team.  Again now, whether it’s a coincidence or not, we’re a bloody mess.

Anyway, former Chelsea midfielder Vinnie Jones definitely doesn’t think a move for our captain is inconceivable, saying “Honestly, I wouldn’t be surprised if JT moves on.  Sometimes, you’ve got to clear the decks.  You think, ‘How can you leave someone like JT out?’  But sometimes your big, high-profile players go and other players come in and, all of a sudden, the coach is in charge again.”

And on our current coach, Vinnie says “They made a bold statement putting such a young fellow in charge of such a high-profile club and I think that Abramovich has got to stick with it, especially until next season.  He has to to show face.  I think he’s definitely going to give him some time, I really do.  If you look at the guy’s record, he’s going to make decisions that the fans are not going to be happy with.  If a coach comes into a new club and makes decisions that fans are not happy with, but gets the results, they go with the coach.  It’s as simple as that.  If results don’t go the right way then they start shouting for his blood.”

It strikes me there are a few ready to blame AVB already, which of course is nonsense but predictable given our history of blaming managers.  This time though, are they looking at the wrong ‘leader’ to move on?