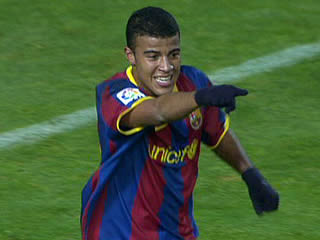 With Andre Villas-Boas said to be thinking as much about Chelsea in the longer-term as he is about getting through his first season (which is pretty optimistic for a Chelsea manager it has to be said), he’s been linked with the potential acquisition of yet another emerging young talent.

We all know Barcelona’s Thiago, right?  Well, we can calm down because it’s not him, it’s his brother. 18 year old Rafinha Alcantara is the latest young player to be linked with a move to Chelsea, to join last summer’s Barca youngster Oriol Romeu. Not that we see much of these youngsters we bring in, but I suppose they all keep each other company.

Anyway, Rafinha is said to have started out as a defensive midfielder but in true Barcelona style, now has a more attacking position and it’s his ‘eye for goal that has appealed to Villas-Boas’ according to reports.

Mind you, I’m not convinced the Barcelona B sider is exactly chomping at the bit to get to Stamford Bridge, because he responds to the rumours by saying “Chelsea? I don’t pay attention to these stories, really.  My idea is to renew my contract with Barcelona soon. We’re close to a deal.”