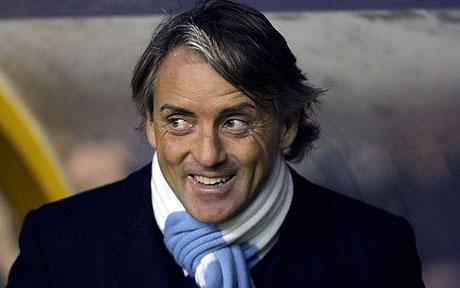 Roberto Mancini is kidding, right? I mean, is he really trying to deflect questions about the title with some lame mumbling about needing 5 or 6 more players? Fair enough some of the one’s he’s got couldn’t pull off a trick if Paul Daniels was coaching them never mind Mancini (yes Balotelli, I mean you) but you’d have thought they’d be ready for a go at the title by now wouldn’t you?

Considering we’ve always been told we bought our titles and our first one came a year after Roman brought Mourinho in, shouldn’t the City owners have seen some sort of return for their investment by now? 3 years of spending by City and the best Mancini can come up with for them is a Champions League spot? Seriously? They’ll be telling us money doesn’t equal success next!

Obviously the irony of this post isn’t lost on me. I’m sure, more than sure in fact, that there were plenty of rants about our ‘fantasy football’ spending while I was far too busy wetting myself with excitement to give a shit less but since even United have spent a few million so far, City continue to forget there’s a recession on and I’ve conveniently forgotten the signings of Torres and Luiz since we’ve yet to add anything of substance this summer, I feel entitled to adopt a holier than thou attitude.

Seriously though, it was extremely hard to argue our success wasn’t about money when, of course, it was Roman’s investment that made the difference between us challenging and seriously competing for the title but if that really was/is the case, given City’s outlay so far, shouldn’t they already have a couple of titles and several domestic trophies to gloat about?

Or maybe the problem’s Mancini? He didn’t have the luxury of a Ranieri squad when he took over from Hughes obviously, but he’s had time to make his own mark at City now hasn’t he? Then again, judging by the encounter we witnessed between him and Balotelli yesterday, his mark doesn’t seem to stand for much – ask Carlos Tevez.

Not to worry though because Mancini’s stamping might just secure him Aguero and if he can get him, Samir Nasri, so just another 3 or 4 to go and he might be ready to nick more than a cup of sugar off the neighbours – not that the City manager is any more prepared to admit that’s what he’s hoping for than United are to admit it’s a possibility – because if they add both of them, even Roberto Mancini would struggle for an excuse not to come away with a title.

As for us, well Roman might still have a few quid but since all our players are old (myth) and we’re struggling to bring anyone in during the window (isn’t that right, Fergie?), we’re being written out of the race anyway so the pressure’s off.

They’ll be saying Roman’s off and we have no history next!