Time For Lampard To Call Time On England? 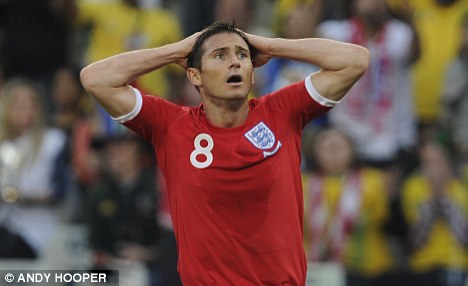 Chelsea fans will rarely have a bad word to say about Frank Lampard, but looking at the current England set-up, it has to be questioned as to whether the 32-year-old should call time on his international career.

In England’s most recent match, a disappointing 2-2 draw at home to Switzerland (a match England were tipped to win by various bookies including b win), Lampard was taken off at half-time. Being such a high-profile player and experienced England international, this was a rather embarrassing moment for him.

He will not want for this to be a pattern for the rest of his England career. The first to be taken off, not always making the starting eleven and basically a bit-part player. Of course this isn’t quite the case yet, but Lampard won’t revel in being slowly drifted out.

This is why he has a decision to make this summer. Often the centre of plenty of stick from England fans and now being withdrawn at half-time during a competitive match, he might start to wonder whether it is worth it.

Lampard isn’t likely to want to call time on playing for England and this will be his conundrum. The thought of retiring from international football when he still has a few games left for his country might kill him, but he has to look at what is best for England, Chelsea and himself.

First up, England. In reality, they need to look further ahead than Lampard. He will be 34 during the European Championships next summer and 36 by the time the 2014 World Cup comes around.

If he wanted a way out of England with some dignity, he could cite giving the younger generation the chance as his reasons. This would not only make sense, but mean that someone who has always given his all for the Three Lions a respectful way out.

Chelsea would benefit from Lampard retiring from England too. He has had injury problems over the last few months and this affected the Blues’ campaign. If not playing for England means the man in a Lampard Chelsea Shirt might be available for more Premier League and Champions League games, it would be a positive move.

Then there is the man himself. He will be on his summer holidays right now wondering where his career is headed. Does he really want to wait around until he is dropped completely by England? Or should he take control and bow out gracefully?

There will of course be the temptation to play one last major tournament (presuming England qualify for Euro 2012) in an attempt to win something with his country, but there are more than a couple of reasons why the timing might be right for Lampard to call time on his international career.