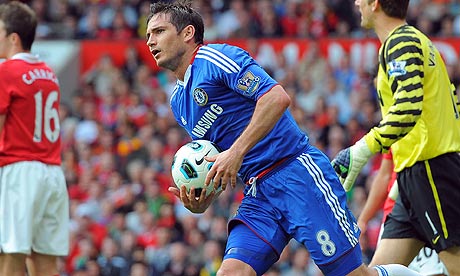 Well what can we say? We were invited to the title bash, turned up 45 minutes late, just about got a foot in the door then decided we didn’t fancy hanging about after all.
It was a party wasn’t it? I mean, we certainly seemed to be playing pass the parcel in the first half because we couldn’t get rid of the ball quick enough.and Fergie definitely thought it was his birthday when they went a goal up within 36 seconds. Luiz, whose curly head evidently hadn’t quite worked out we’d kicked off when Park’s pass went to Hernandez, ended up a bystander as it was duly dispatched past Cech. ‘What me boss?’ Yes you Mr Luiz!
Stunned much? It was like Dawn of the Dead out there with only Petr Cech saving us from something much worse as the shots reined in. Valencia, Rooney, Hernandez again, in fact the only one I don’t remember having a shot in the first half was Van der Sar. Ok, so I’m being unfair here, not every Chelsea player was auditioning for Tussaud’s, we did have the odd ‘moment’, they just weren’t very convincing.
Ivanovic was having one of ‘those’ days, you know the one’s – where he doesn’t seem to notice his every move has everyone else a nervous wreck – and he took his first card for a foul on Rooney. I say his first card because he could have had several really (as I’m sure Fergie’s notebook would testify). Anyway, enough of what we did wrong, oh no wait, we fell asleep for a United corner as well and Giggs was given plenty of leeway courtesy of Kalou to get a cross to Vidic to head home. 2-0 down in 23 minutes, bloody marvelous!
Could’ve been a lot worse though, we could’ve capitulated completely at that point but Kalou and Drogba both thought it was time to bring Van der Sar into the game. Unfortunately for us, the United keeper doesn’t retire until the end of the season – and I’m sure even then could probably save shots in his sleep.
The usual red mist descended on Rooney as he tried his best to save Ancelotti needing to make a half-time decision over Luiz but with our Brazilian defender still able to walk, Webb opted for a yellow. As it turned out, that buggered him up because when Ivanovic evened things out with Rooney’s ankle, he clearly didn’t have the nerve to pull out a card, much to Rooney’s annoyance. And we somehow went into the break with the side intact.
Surprisingly our right-back wasn’t culled during the break although slightly less surprising is that Luiz was – replaced by Alex. And whilst I’ll always welcome the arrival of Ramires, if I’m honest, the fact that it was in the place of Mikel rather than Essien was definitely a ‘what the fuck’ moment. Still, it hasn’t mattered all season what our Ghanaian has done – or rather hasn’t done – so I guess a massive game like this shouldn’t make any difference either. Oh and by the way, Evans came on for O’Shea.
Rooney, clearly still pissed off from the first half was doing his best to get Ivanovic a second yellow but if he’d been patient he’d have noticed Branna was doing perfectly well on his own on that score. Then something rather unusual happened, Frank Lampard, despite knowing Howard Webb was on the pitch decided to block Valencia’s cross with his hand (yes, Lampard had been on the pitch since the start for those who failed to notice). Was the handball so surprising? Not especially – but Webb failing to give the penalty was. Ball to hand? I think not.
Kalou embarrassed himself with a lightweight dive in the box under a Vidic challenge – and found himself subbed for Torres as punishment – Valencia didn’t suffer the same fate when he made a meal of a John Terry tackle. Second penalty missed? Possibly but platoon reconstructions never impress officials to be fair to Webb on that occasion.
Anyway, somehow or another, with Ramires (who by the way, was clearly the only player to have had 3 shredded wheat for breakfast), putting in a cross for Ivanovic to nod down, we found ourselves just the one goal behind when Lampard poked it home – and unlike Arsenal earlier, kept our heads long enough to not concede a third. Mind you, we didn’t score again either, so I should probably let go of those straws.
Overall then, completely agree with Ancelotti’s sentiments – we were the best side for the last couple of months but on the day, that honour went to the opposition and we went out of the title race with more of a playground slap than a fight. Gutted much? No, I thought I took it rather well really 🙂

Rooney Or Messi? No Choice For Chelsea Boss
Manager Watch: The Case For Carlo