The Beautiful Game: Passion Not Required 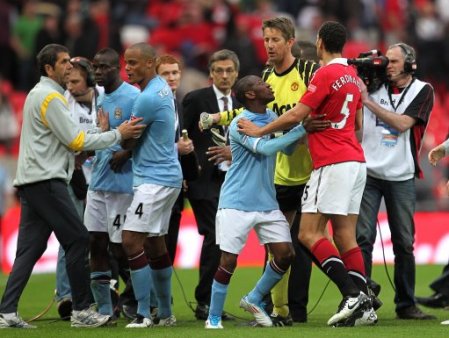 Saturday, Balotelli behaved like the classless c*** we all know he is and Rio Ferdinand quite rightly got the hump. I mean, celebrate by all means, run to your own supporters and bear your arse for all I care but inciting the opposition supporters? Strictly small time in my opinion.

Would John Terry have reacted the same way as Rio? I should bloody hope so because that was the reaction of a captain who feels the loss of a game every bit as painfully as the fans. So why did he feel obliged to issue an apology for reacting to Balotelli’s piss-take?

Well, it seems there’s no place for passion in today’s game. Even if that wasn’t a view shared by Dalglish and Wenger yesterday, with the former offering his opposing manager some sound advice at the end of their 1-all draw. Will Dalglish face a touchline ban though? Not likely but then would we put anything past the FA after Rooney’s ban?

If I’m honest, whilst I certainly said my piece on Rooney’s outburst, it doesn’t mean I agree with the punishment – if anything, I thought it was draconian. Seriously, who’d have thought the F-word could cause so much fuss in a sport that’s littered with bad language? Football’s an emotive sport, it changes who we are and how we behave when we’re caught up in the heat of it and if it does that to us, anything down there on the pitch will be even more intense.

Yet the expectation these days seems to be for players to keep all that in check simply because there’s a camera shoved up their left nostril, but that being the case, isn’t it that intrusion the FA should focus on instead? If it’s ‘respect’ and reputation they’re worried about then maybe the media coverage of games should be governed as closely as the players’ mouths since what they do has nothing to do with passion.

Of course that’s a nonsense though because they have no more control over what’s captured in the heat of the moment than the player’s themselves have – the point is, these are things that happen automatically. They’re not pre-determined, there is no way of censoring it, it’s just what happens when emotion and adrenaline are at their highest levels. Take that out of the game and it’ll be as sterile to watch as a ‘Cif’ advert.

Little did we know where the cards for players ripping their shirts off in celebration would lead eh? Now it seems the FA (along with their morally correct do-good backers) won’t be happy until the games are played and watched in silence, with polite applause and the odd ‘hoorah’. No tackles, no celebration and certainly no passion – just back-slapping for the stiffs in the boardrooms for killing this country’s sport.

Well, that doesn’t sit right for me. I’ll keep my passion thank you very much, my language will continue to be as uncontrolled and raw as my emotions when I’m watching a game. If players piss me off, I’ll have it known. If the ref’s shit, he’ll have to excuse me for forgetting my manners. And if the opposition take the piss, they deserve everything they get.

Would that warrant an apology? In words the FA clearly wouldn’t understand ‘F*** off would it!’.