Why Drogba Has To Start Against United 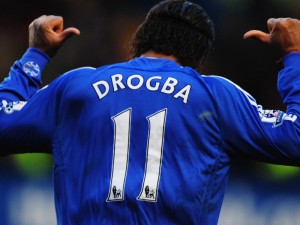 I know some people might think I never have a good word to say about Didier Drogba – and some of the time they might be right – but I’d be the first to advocate he has to start for us Tuesday night.

Not that I’m imagining for a second that he’ll be all over United or that I’m even letting myself hope we can not only recoup the deficit we go into the game with but actually pull something even better than that off at Old Trafford but simply because if we’ve any chance at all of actually staying in the game beyond the first half, Drogba’s our best chance.

The 4-3-3 Ancelotti started with against Wigan is surely the way to go, with Didier on his own up front and Malouda and Anelka either side. Torres, as much faith as I have in him turning it around at some point, has far too much pressure on him right now and far too little confidence to be expected to deliver it in a game like this.

Didier Drogba, a man with more confidence and more Champions League experience, won’t feel anything like the sort of pressure Torres would and if anything, would gain a little bit more just from knowing he comes ahead of our new signing in this sort of game.

Drogba, as we know, thrives on adulation and recognition, which explains why just one week ago he had a go back at a supporter questioning him. He won’t have been happy we lost to United in a Champions League game again either, after all, he’ll know more than anyone he wasn’t even around to see the end of the last one.

Drogba has the strength, physical presence and the bit between his teeth Torres seems to lack for us right now and whilst we might have to learn to manage without him after the summer, for now at least, the Drogs has to be let out.