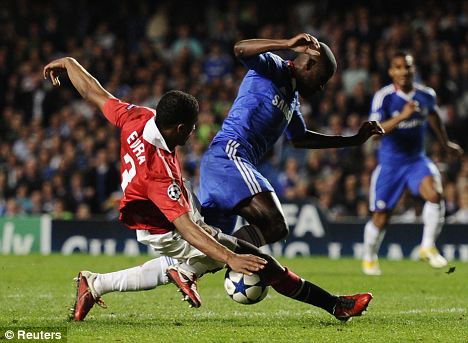 It’s not over yet – it just felt like it last night.

Bottom line is we just weren’t good enough and if we weren’t pissed off enough with the performance itself, the one lifeline we should have had with a nailed on penalty, we didn’t get because the usual Champions League rules for Chelsea applied. At least we can’t complain the refs aren’t consistent when it comes to us in Europe eh?

To be honest, I wouldn’t even know where to start on last night without smacking my head against the nearest wall, so I’m not even going to try. No amount of whingeing will change the result now, we’ll have to hope for a decent ref (aka a miracle in our case) and a better performance at OT.

Anyway, whilst I go and sit quietly in a nice, safe padded room, here’s a few thoughts and opinions from elsewhere:

The Independent, it seems, have written our season off altogether after the first leg

RoM try to convince everyone it wasn’t a penalty

Goal.com give us Ancelotti’s take on it

And the official site believe we can still do it

Rooney To Get Off His Ban?
Midfield shortages highlight Chelsea’s European flaws