Essien: The Case For Club Before Country 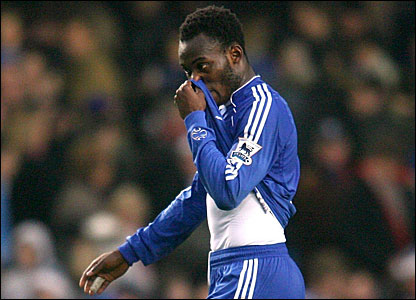 I was talking to someone after last night’s England v Ghana game about Michael Essien’s absence.

I’d read the other day how Ghana fans are pretty unhappy with Essien taking an international break although after two consecutive injuries playing for Ghana that meant he couldn’t play for Chelsea. The cruciate ligament injury he suffered on international duty in 2008 saw him miss 6 months of that season for us, followed by a knee injury the following January – when he’s only just come back from a spell out for us with his hamstring – meant he missed the remainder of that season as well.

Having still not quite got himself back to where he was pre-injuries, Essien decided something had to give if he was going to fully recover. So, having spoken to Ghana, Essien made himself unavailable for them last August. Now though, with him still absent for last night’s game, the Ghanaians are getting a bit fed up although Ghana manager Goran Stevanovic assured them “I have spoken to Michael Essien several times. He is here with us (at Wembley) and I profoundly believe in the next game he will be here with us playing. I said I don’t want to speak about players who missed tonight. Maybe I can say we missed Michael Essien and other players like Kevin-Prince Boateng.”

Anyway, back to the conversation I was having last night and the point of it was mainly around suggestions that Ghanaians were pushing for the Chelsea midfielder to either go back or get out, which for me is a bit harsh. I was defending Essien’s decision to put Ghana on hold mainly because it was his commitment to playing for his country that ultimately led to his injuries – and Chelsea suffered the consequences of his absence.

Of course, the fact that he suffered the injuries wasn’t Ghana’s fault directly but seeing as Chelsea are the one’s paying his wages and had to do without his services for almost 2 seasons, is it so wrong for him to focus on getting himself completely right for them first before risking any further damage with additional games? Not for me it’s not.

It goes without saying if players haven’t been fit for selection for their club, then I don’t think they should be stepping up to play internationally – like Benayoun did yesterday and certainly Essien was expected to do previously – but of course this time, Essien had been playing for us. Even so, I still think he was entitled to put his physical health first.

So, the next question was how would I feel if an England player did the same thing? And to be honest, I think my response would be the same – in fact, if it was Terry, Lampard or Cole I’d be more than happy to see them have a rest but that’s just blatant bias.

What if it was someone like Gerrard or Ferdinand though? Again, I reckon I’d still say the same thing because whilst I’ve always advocated players shouldn’t put club before country for no good reason, this has to be balanced by cost – and not just in financial terms.

Ashley Cole At It Again?
Torres Happy With Returning Midfielder?