Mourinho Protecting His Players Or His Future? 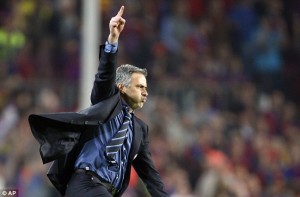 When he was at Chelsea, Jose Mourinho used to say he soaked up all the press attention to protect his players, even if his players might suggest it was more about keeping the spotlight firmly on himself. Certainly, Makelele has always been pretty clear of his former boss’ agenda, confirming “No-one was allowed to be more famous than him.” And whilst there’ll still be plenty who buy into Mourinho’s version, you’d have to question exactly how he’s ‘protecting’ anyone at Real Madrid with his recent press attention.

It’s no secret there’s no love lost between Capello and Mourinho, particularly after the latter declared back in the summer “The problem is the manager. Capello will not work for England. He has a one-track relationship with players. Ask anyone here at Real Madrid. He can’t change. You cannot go around just shouting at players. They need to feel special. It is clear. Capello will not work for England. He does not know the players. They are frightened of him and they can’t play for him. For me, it is a mess for England. Players need clear tactics. They cannot be confused about what they have to do. It is the manager’s fault. And it is a big shame.”

Fast forward to the present and as full of himself as ever and right on cue with Capello currently working his way through the ‘1001 PR cock-ups’ manual, up pops the Real Madrid boss to add a bit more fuel to the fire. Never one to miss an opportunity to reinforce his specialness, the Portugeezer is now reminding anyone who’ll listen “I was hours away – I almost signed up for the England national team. But at the last minute I began thinking, ‘I am going to coach a national side, there will be one match a month and the rest of the time I will be in my office or overseeing matches. And then to have to wait until the summer to compete in a European Championship or a World Cup? No, it wasn’t for me. So at the last moment I pulled back, preferring to wait for the right job to come along, a good club, a challenge that could motivate me. That was Inter.” Not to mention the lack of publicity that might go along with just a handful of games each year eh Jose?

Not that this is an article in defence of Capello, far from it, I’ve never believed he was the right man for the England job and his recent actions only serve to reinforce that, but then Mourinho wouldn’t be the right man either. Think back to some of the behaviour of our players when he was at Chelsea – can you even imagine 11 England players behaving the same way?

Mourinho talks about players needing to feel ‘special’ but in his terms, this means having them strutting about believing they can do no wrong, mobbing refs and generally making sure everyone outside their cocoon sees them as complete arseholes. We’ve already had plenty of claims leveled against certain England players thinking they’re Billy Big Balls and therefore don’t need to put in any effort – and to an extent that may be true but with a new England generation threatening to emerge, is that a trend we want transferred? I’d say not.

Still, with him clearly not prepared to stay out of the public eye for the long periods an England manager does, I guess we just wait and see which Premier League club he turns up at when he’s tired of Real Madrid or vice versa.

Why Chelsea Should Be Grateful They’ve Got Ancelotti
Ashley Cole At It Again?