Ashley Cole At It Again? 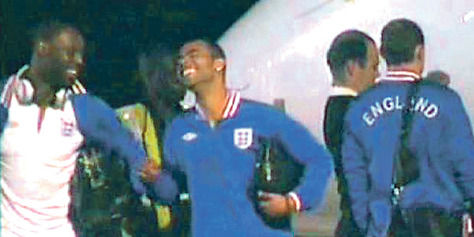 It doesn’t take much for Ashley Cole to piss people off usually but then he doesn’t really help himself does he?

His history on and off the field pretty much speaks for itself, from disrespecting refs to disrespecting women but whilst to an extent we have to accept that’s what comes with having players like Ashley Cole in our squad, when it comes to disrespecting Chelsea, that’s where the line has to be drawn.

Having been released from the England squad along with JT and Lampard to prepare for our Premier League game against Stoke at the weekend and the mid-week Champions League clash with United, Ashley Cole decided to take the opportunity to go out on the lash. Of course he wasn’t alone but I couldn’t care less what Carlton Cole and Shaun Wright-Phillips do with their spare time to be honest.

Anyway, whilst the Daily Star in its usual sensationalist way report he was downing cocktails all night in Kensington before emerging from Jet Black in the West End at 5am, with England supporters going on about the ‘contempt’ he’s shown for his national side, I have to say what I found most shocking about the story wasn’t that he was out acting the playboy til the small hours again but the fact the Daily Star suggested Cole ‘stood out because of his ultra-white teeth’.

Joking aside though, this is a player being paid £120,000 a week to play for Chelsea and yet ahead of what could be two of the most crucial games in our season, he’s behaving like a Sunday League player.

Sort it out Ashley ffs.

Mourinho Protecting His Players Or His Future?
Essien: The Case For Club Before Country