Is It The England Captain Or Manager That’s The Issue? 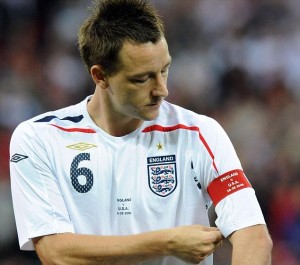 If I’m honest, I wouldn’t fancy being on the same road as Fabio Capello because the way he does u-turns is downright careless.

Are we meant to take this man seriously as the England manager? Do me a favour, he has no idea what the England captain represents for anyone who’s English and actually gives a shit about their national side. If he did, he wouldn’t be playing eeny meeny miny moe with his players.

Don’t get me wrong here, for all his failings (and he’s got plenty off the pitch), I think John Terry is a great captain. And whilst I’d never excuse any of his wrongdoings and the controversy it’s brought, the bottom line for me is that I want what’s best for Chelsea – and right now, that means him wearing our captain’s armband.

I thought the same about his captaincy for England really. Whilst he definitely didn’t stride out onto the turf with a halo in place, he had something that is sadly lacking in too many England players – pride in the shirt. If he could only have had as much respect for his position once he was off the field, he wouldn’t have had to stand watching his team-mates play pass the parcel with the armband, refusing to let him join in. Unfortunately for Terry though, he fucked up and paid the price.

When Capello very publicly stripped JT of his captaincy and handed it to Rio Ferdinand, he probably expected to see the United man have it on his arm a little more than he has and I’m sure Ferdinand would have been happier getting off the physio table occasionally as well. Either way, Rio won’t want to see it end up back on Terry’s arm. He can’t help the injury he suffered and it’s not like he’s got himself in the headlines – and yet we were being told Saturday he was about to lose the captaincy anyway.

A few awkward questions later though and Ferdinand was apparently reassured that should Terry get it back, he would be regarded a mere understudy in the event of injuries to both him and Gerrard against Wales, so any leading role would be strictly temporary. I imagine Frank Lampard is delighted to have been overlooked for the part after he took the stand-in role last time out as well. But then again, I heard the groundsman’s nose is a bit out of joint because he thought he’d be in with a shout before JT and all.

Ok, so I’m having a dig now but the fact is, one minute Capello makes this big stand about having to strip JT’s captaincy for the good of the team, has it very clear the Chelsea captain won’t get it back again as long as he’s around, then changes his mind – twice.

I’m not buying all that ‘temporary’ nonsense because England shouldn’t be appointing temporary captains. The natural order should always be that with both the captain and vice-captain out, you go for the most senior player – consistently. And that’s how it should have been all along. So when Rio and Gerrard were both out, it should have automatically gone to Terry. The fact that it didn’t, because the draconian punishment had to be dragged to those lengths, has left Capello back-peddling like a tourist on a pedalo and you wouldn’t have much confidence on one of them steering safely home would you?

Should Chelsea Deal With Their Boys Behaving Badly?
Is Roman Really Obsessed With The Champions League?