Can Carlo Turn It Around? 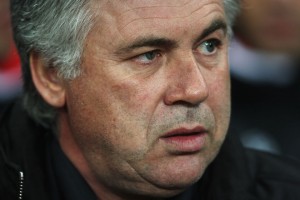 “No desire, no passion, no motivation, no imagination and no bloody shots on target!” Ring any bells? Cast your minds back 2 years to Scolari…..Back then, we looked devoid of ideas, passion and fight, we had a manager who wasn’t really arsed, we had no plan B and it isn’t a position we’d ever want to find ourselves in again.

Is it any wonder we’re all walking about under a black cloud then? Back then, we’d just failed to turn up against United, in one of our most embarrassing performances against them in recent times. We couldn’t score, Didier Drogba looked like he couldn’t care less and worse still, the entire team looked decidedly uninterested. You getting the picture?

Now, I’ve said it before and I’ll say it again to be clear, I’m really not one of those ‘sack the manager’ supporters the minute things don’t go our way. If anything, I’m sick to death of the circus that surrounds our managers and it’s something the club has brought on itself as a result of sheer impatience most of the time. Of course, that seems to be a part of the game these days as well and Chelsea are by no means the only club that doesn’t give managers a fair go but we’re probably the worst given our track record.

Having said that, I do have my concerns about Carlo Ancelotti’s abilities to manage Chelsea. He just doesn’t seem to have any real connection with Chelsea at all – sort of like Scolari really. It was a big payday for him, so if it worked out then great but if it didn’t he didn’t stand to lose anything. In fact, there’d be a nice big pay off just like the other managers before him. So, irrespective of our results, Scolari just shrugged his shoulders without really doing anything to address what was going on. See where I’m going with this?

Last season, things went well and Ancelotti came away with the double in his first season and even at the start of this season, it was looking as if that momentum was still with us. Let’s not forget though, the side Ancelotti inherited wasn’t the shambles Scolari had left behind because Guus Hiddink had picked that side up off the floor and put the fight back in it. And of course Ray Wilkins was around to add some continuity between the brief Hiddink era and the introduction of yet another new boss.

Now though, we’ve lost the link between the manager and the players in Ray Wilkins and any momentum we’d gathered seemed to go with him. Even more worrying though is that Carlo Ancelotti doesn’t seem to be able to get it going again and we’re on the sort of downward spiral we were getting into with Scolari.

Of course, we need to look at the part our players have in this as well, they’re the ones not doing what’s required on the pitch, Drogba, Lampard, Malouda, Anelka, none of them are producing the sort of goods that delivered us the double last season, even JT seems remarkably restrained most of the time. And whilst I’ll hold my hands up to being one of the first to criticise when our players were mobbing refs week in, week out under Mourinho, when it was pointed out our players barely raised an eyebrow when Everton were kicking them around the park at the weekend, I couldn’t help but agree.

So is that down to them or the manager? I’d have to say a bit of both. Of course, none of them are getting any younger and we have to accept the possibility that this is a factor in their poor form but given that none of them are suggesting they’re ready to retire anytime soon, you could argue they should be pushing themselves a little harder to prove it.

For the manager’s part though, he can’t be blind to poor individual performances and yet he persists in what appears to be the generation of an automatic team sheet. Dropping Didier Drogba for one game might have felt brave from Carlo’s point of view but did it really give any sort of message when the rest of our under-achievers know their places are virtually guaranteed?

Obviously, the manager is under pressure and it’d take a brave man to start dropping the Frank Lampard’s, Michael Essien’s and Didier Drogba’s but given our current situation, isn’t a bit of bravery called for? What does someone like Josh McEachran have to do to get a game, for example? It was suggested to me yesterday that if he was 28, he’d be playing every week and I think that’s a fair point given the difference he’s made to our attacking play when he has had the opportunity.

Does Carlo strike you as a brave manager though?

We’ve got some massive games on the horizon, nerve-wracking games for us and ahead of them, Ancelotti says “We know the Premier League is now very tough for us but we want to play in the Champions League next year, it is the most important thing for everyone. I don’t want to train a team that is not in the Champions League as for me it is the best competition in the world. But I am an optimist and I believe my team has the quality (to finish in the top four).”

Well, I’m just not convinced statements like that transfer his ‘belief’ to the team and with United on the horizon, it doesn’t feel very comfortable right now.

Is It Just Conviction Carlo’s Missing?
John Terry: It’s Time To Man Up