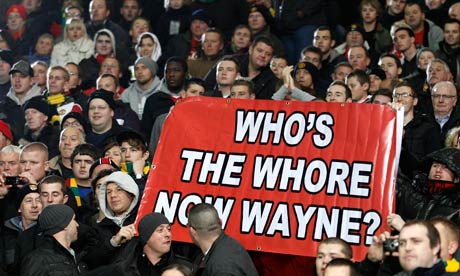 Supporters are so fickle. Not exactly an exclusive scoop I know but every now and then something happens that makes you laugh at the irony of it all.

Yesterday, Wayne Rooney scored what can only be described as a phenomenal goal. Once I’d picked my jaw up, watched the replay 10 times, or however many times Sky showed it, despite agreeing with everyone else that it really was sublime, my overriding thought was “what a c***”.

Standard reaction to one of your rivals scoring the goal of the season? Maybe, but not from me. I like to think I’m usually objective enough to give credit where it’s due (albeit grudgingly). If it had been Berbatov, for example, it would have just confirmed what I’ve always thought about him – bloody good player, great skill and one I wish we’d got on our books. But, as Rooney stood there striking the arrogant Beckham-style pose before taking a bow in front of his ‘adoring’ supporters, whatever he is as a player didn’t even enter into the equation, the word “c***” however, did. At least Beckham had the good grace to leave.

Obviously Old Trafford erupted, they’d just gone ahead in the derby so you’d expect that whoever scored but Rooney of all people? It must have taken the shine off it surely? Evidently not. Wherever you looked last night, he was being hailed as Superman. Some sort of demi-god again and all just a few months after he was allegedly ready to sign for yesterday’s opposition. Oh how quickly they forget.

This isn’t a piece to batter United though, they’re certainly not alone when it comes to forgiveness knowing no bounds. What about Liverpool? We know a fart in a lift would receive a much warmer welcome than Fernando Torres would on Merseyside these days but what about their players who ‘do a Rooney’?

Steven Gerrard certainly hasn’t been completely faithful to the Kop and yet he’s still their blue-eyed boy. One minute they’re burning his shirt and issuing death threats, the next, it’s as if the whole thing was just some nightmare scenario dreamed up by a soap script-writer, and when we ‘wake up’, it never happened at all. Of course, we won’t have forgotten though, in fact we’ll use it every chance we get, whilst they’ll continue to place him firmly on his pedestal and anoint him at every opportunity.

We’re not free of hypocrisy either, whilst neither actually came out and said they wanted to leave – if anything they did the complete opposite – both Frank Lampard and John Terry messed us about over their contracts. Lampard later admitted his head was all over the place and the thought crossed his mind, although our captain, continued to deny even considering a move despite admitting to ‘sleepless nights’. Both ended up with better deals however.

Like Rooney and Gerrard, neither of those are angels off the pitch either and clearly Terry took adultery to an even more unsavoury level by bedding a team-mates missus but whilst the rest of the world see him as one of football’s cretins, the ‘Captain, Leader, Legend’ banner still has pride of place at Stamford Bridge.

Is it any wonder these players behave the way they do when there’s never any consequence? They can hold clubs over a barrel financially, make mugs out supporters who genuinely believe in their loyalty, have a quiet week or two maybe, then they’re back to strutting around with the supporters lapping it all up.

I’m not suggesting for a minute we’d be better off without them because whilst I lost all respect for JT during the countless days of speculation before he got his new, much inflated salary, if I was asked would I want another captain, I’d say no. I want what’s best for Chelsea and right now, there isn’t a better candidate than JT. Besides, he is a great captain – on the pitch. So is that the crux of it? The club and not the individual is what’s important to the majority of us? I’d like to think that’s the case but know from experience very few agree with my hard line where JT is concerned.

Still, whilst everyone continues to rave about Rooney today, picking over the goal already hailed as ‘the defining moment of United’s season’, I guess it just leaves me wishing these players had the courage of their conviction. Take Fernando Torres, was he adored at Liverpool? Yes. Could he have got a better deal out of them? Probably, but irrespective of either of those things, once the transfer request went in, the odd burnt shirt wasn’t going to prompt a u-turn.

Mind you, had he done so, I’m sure all would have been forgiven anyway!