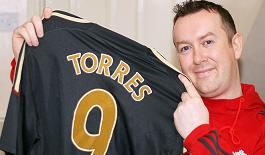 This is the Liverpool fan formerly known as Shaun McCormack. The 36-year-old dad of four had a brain wave 35 days ago. He wanted to change his name by deed poll to prove his dedication to his football team. How about changing it to the name of the captain?

“I did think about changing my name to Steven Gerrard, but I wanted something a little more flamboyant.”

So, you guessed it, ol’ Shaun here officially changed his name to Fernando Torres. He’s even opened up a bank account in his new identity and put a new moniker on his birth certificate.

“It’s a dream come true,” he said. “I know he isn’t having the greatest of seasons but, for me, he’s the best striker on the planet.”