Chelsea Skivers Back To Work? 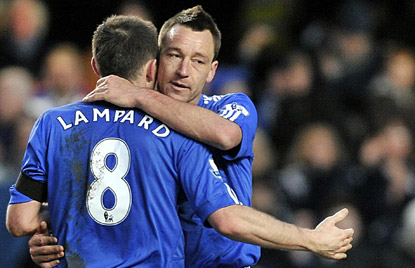 As we know, John Terry and Frank Lampard both skived the England qualifiers this week.

JT limped about a bit against Stoke, later informing us he’d actually been playing with an injury for some time – yeh, yeh, pull the other one John. Frank Lampard was a bit more convincing though, going through groin surgery to get out of England’s trip but still, it’s questionable whether it actually hurt against Stoke – I mean, he’d normally play that badly and miss a penalty, right?

Anyway, just to make sure our critics are in no doubt whatsoever, Ancelotti has confirmed JT will be back for us against West Ham this weekend although pretends he’s not sure about Lampard – to make it look good obviously. The Chelsea boss says “Lampard had surgery and I think that he will start to train this week. I don’t know when but we will see how he trains and we will take a decision for the game against West Ham. Terry didn’t have surgery but he used the last week to improve his hamstring. He will start to train with the squad this week and I think he will be able to play against West Ham.”

I’m sure no-one’ll notice if we discreetly slip them back into the side. 🙂