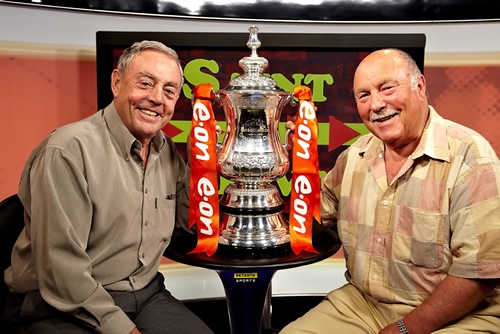 Ok, it’s FA Cup weekend and Setanta are rolling back the years to a time when the build-up to the cup was almost as big a deal as the game itself.

For this year’s FA Cup, Setanta has managed to reunite the legendary double-act of Ian St John and Jimmy Greaves. Coverage starts at 10am and will be free-to-air, so with the signal un-encrypted it’ll be available to cable and satellite viewers without a subscription until 7pm.

For the first time ever, Setanta are also running live commentary of the FA Cup on Twitter. The Twitter commentary, which can be followed at www.twitter.com/commentweeter, is a key component of Setanta’s coverage, which plans to combine traditional FA cup final TV viewing with a modern twist.

In addition to Champion’s Twitter commentary, Setanta will running an FA cup final ‘event centre’ on Setanta.com before, during and after the game. The ‘event centre’ will feature the best action, reaction and stories and will include blog posts, Flickr photo galleries from Chelsea and Everton fans, behind-the-scenes videos and twitter feeds from presenters, fans and celebrities. Highlighting Setanta’s commitment to providing the best in online content, the ‘event centre’ can be found at www.setanta.com/cupfinal