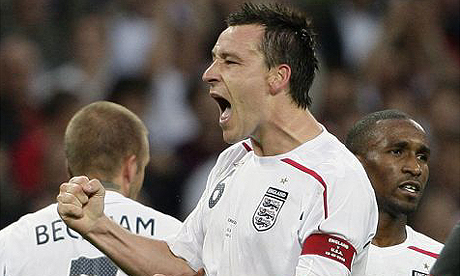 England take on Ukraine tonight in a World Cup qualifier and with our international side’s history in shoot-outs and John Terry leading them out, I guess it was inevitable the press would focus on penalties.

Mind you, the Chelsea and England captain insists “I‘d never shy away from taking a penalty, be it for England or for Chelsea.  I’ve taken them in big games before, with a different outcome to what happened in Moscow, so it is not an issue for me. I’d always step up to the plate. As captain, it’s important that you lead by example. When I was rewarded with the captaincy ahead of the Czech Republic friendly, I remember it vividly because I was told in front of the entire squad and not beforehand in person.  But if I didn’t have the armband, it wouldn’t change the way I play.”

Still, it wouldn’t be the British press unless they were harping on about past failures, although Terry suggests “Nothing could be further from the truth and I think some people have jumped on the bandwagon with this, simply because we reached a couple of quarter-finals under Sven-Goran Eriksson.  If you look at our squad, there are a number of players who have been to major finals with their club sides, such as the Champions League final, and you need a certain mentality to get to that level.”

And whilst England’s 4-0 win in the friendly at the weekend was fairly convincing, there’s still no room for complacency as Terry, obviously mindful of the past, says “England has no divine right to be at either of the two top tournaments.  It was an experience that hurt all of us, but our results since have got the fans back on side and we are all moving forward together again.”