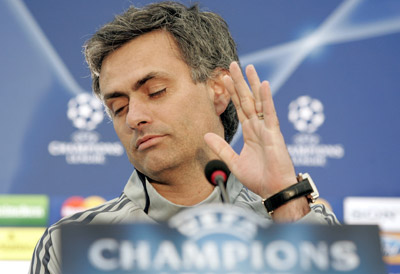 I don’t know about anyone else but I don’t find Mourinho’s interviews in the press anywhere near as tolerable as I did when I regarded him as ‘special’.  I mean, even when he was our manager there were times when he had me cringing and wondering how the hell we were meant to defend his latest bout of paranoia – which I felt duty bound to do irrespective of whether I actually agreed or not. But now, if I’m honest, he just gets on my bloody nerves.

It might have been only five minutes ago he was going on about this great love affair he’s got with us and how he’d return to Chelsea one day but it appears he hasn’t taken all that long to change his tune as the headlines inform us he now considers us an embarrassment.

His latest rant has heard him suggest “Yes Manchester United are the best in England but you have to ask how good has the Premier League been since I left?  United have won it with ease since I have gone because no manager has put together a team that can rival them.  They have a great squad but are their players really that much better than Chelsea’s or Liverpool’s? I don’t think so.  Something else must be the problem and somebody has to take responsibility for that.  Chelsea have had no stability. Arsenal are nowhere and Liverpool threatened but I don’t think anybody really thought they were ever going to win it.  I would not allow a team of mine to be so far behind. It is embarrassing in early March.”

Now far be it from me to suggest our former manager is an egotistical cock but I wouldn’t be a mile off the mark if I did would I? I mean, is he bloody serious? Surely if he was as ‘special’ a manager as he seems to think he is, he wouldn’t even need to ask whether United’s players this season are really that much better than ours.  Does he not recognise a talented squad when he sees one?  Oh hang on though, he must do because he sold one of those at Chelsea didn’t he?

But anyway, quite apart from that what’s all this “I would not allow a team of mine to be so far behind. It is embarrassing in early March” business? Correct me if I’m wrong but right now we’re seven points behind United in the league aren’t we? So is Mourinho now suggesting that Chelsea – the very same Chelsea he managed, i.e. making it his team, weren’t 12 points behind United in March 2007?

Wouldn’t be at all bitter because Hiddink has already done better in his first five games would he?

Another Fresh Start For Drogba?
Could Cole Injury Have Been Avoided?