Who will be top of the Premier League at the end of March? 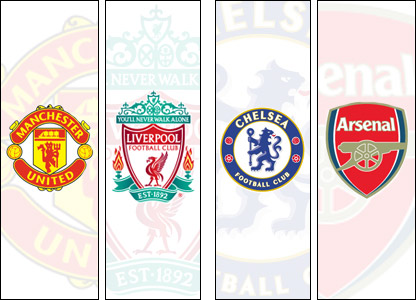 You may remember that at the beginning of the season, I predicted who would be top of the Premier League by the end of September. If I remember rightly I was fairly accurate with my Chelsea predictions, so why not give it another go?

This time though, it is going to be all the more crucial. By the time March comes and goes, there will be only seven Premier League games left and the title run-in would have well and truly started.

So, let’s take a look at the fixtures for the top four teams – Manchester United, Liverpool, Chelsea and Aston Villa – to try and judge how the league table will be looking in a couple of months time.

We’ll take a more detailed look at Chelsea’s games, so that’s where we are going to start.

Saturday 7th Feb – Chelsea v Hull: This, quite simply, has to be three points for the home side. Hull haven’t won in a while and Chelsea should be fired up to ensure a positive response after the Liverpool defeat. 3-0. 51 points.

Saturday 21st Feb – Aston Villa v Chelsea: An absolutely huge game. Perhaps not as far as the title is concerned, but in terms of Chelsea ensuring a top three finish. The home crowd will be fired up and perhaps a draw would actually be a decent result. 1-1. 52 points.

Saturday 28th February – Chelsea v Wigan: There is no doubt that Steve Bruce’s side are a tough nut to crack at times. They proved that at Arsenal recently. However, an early goal should see Chelsea through. 2-0. 55 points.

Tuesday 3rd March – Portsmouth v Chelsea: Mid-week Premier League games often provide entertaining fixtures and this one will be no different. Chelsea will play poorly, but find the net enough times to get past Tony Adams’ luckless Pompey side. 2-3. 58 points.

Sunday 15th March – Chelsea v Man City: Mark Hughes’ team should improve during the second half of the season, but as the recent defeat to Stoke showed – they are poor away from home. 1-0. 61 points.

Saturday 21st March – Tottenham v Chelsea: A tough one to call as you never know which Tottenham will turn up. They can beat most teams on there day, but by this stage Chelsea’s confidence will be high and they will be more resilient than ever. 0-1. 64 points.

So, that means that by the end of March, Chelsea will have 64 points after 30 games. Let’s see how that compares to the other teams! Remember this is only a bit of fun, so don’t go basing all of your football betting on these predictions!

So, the league table at the end of March will be as follows – probably!

As you can see from this, I fully expect a dip in form from Aston Villa. This could mean that Arsenal are the team sitting in fourth at this stage. However, the top three will remain as it is. In terms of Chelsea’s title challenge, well they are still comfortably behind Manchester United and the reality is that Scolari’s men are going to have to rely on them messing things up more than anything else.

Feel free to let me know your thoughts on my predictions!

Lampard Suggests Some Common Sense
A Missing Link At Chelsea This Season?