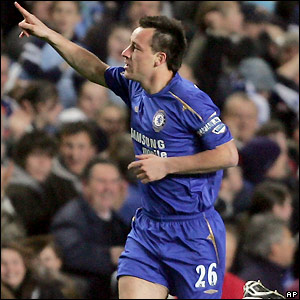 I know I’ll probably upset a lot of supporters by suggesting it, but it’s just a thought – so bear that in mind.

I was thinking about Citeh’s boasts that not content with pinching Robinho from under our nose in the last transfer window (anyone seen the happy little Brazilian by the way?) and already giving us a rather decent sum of money for Wayne Bridge in this window, they’ve still got plans to try and lure Alex, Frank Lampard and John Terry away from us.

Not that I think for one minute that Chelsea would let either of the latter two players leave, it still made me have a bit of a hypothetical think about it. And I sort of ended up thinking that whilst I’d be extremely reluctant to let Lampard go (yes, even after the slating I gave him over his contract!) I’d have to think twice about JT. Of course I know what he means to the players in terms of leadership,  if you can get past the sentimentality, it could be a pretty sound deal.

If we’re looking at going through a transitional period, bringing in one or two new players maybe but using our younger players as much as possible, then £40million for a central defender who’s looked vulnerable to injury much more frequently over the past couple of seasons has to be a bloody good deal doesn’t it? I mean, that would get us a couple of new players for a start – and players hopefully less susceptible to injury, so much more regularly available in other words. It could also facilitate the introduction of some younger players because god knows, it doesn’t look like it’ll happen any other way.

Obviously, the sticking point is what JT represents to Chelsea psychologically and in terms of presence, so maybe his loss would be felt too much for us to benefit from a £40million pay-off, but I don’t know, realistically has JT’s presence this season really delivered what it used to? Hand on heart I can’t say 100% that it has.

Drogba Inviting Offers?
Plenty Of Talk And Still No Money