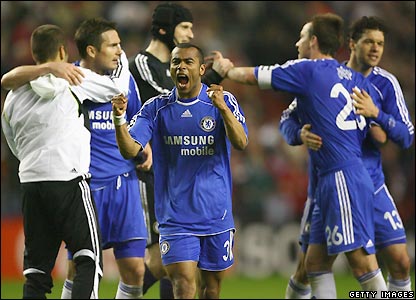 I’ve never exactly been known for my optimism where football – or more to the point, Chelsea – is concerned but even I can’t help feeling this blog has been nothing but doom and gloom lately.  So, with us now halfway through the season maybe it’s time to take stock and have a realistic look at where we are and where we’re going?

At the start of the campaign what I was looking for was a better standard of football than Grant dished up last season, and to be fair, Scolari gave us that but it was all away from home. If you take out the first game of the season against Pompey, a Champions League game against a poor Bordeaux a month later, and the 5-0 drubbing of Sunderland in November, we’re struggling to score at home.

Of course, some might point to the game against Liverpool which saw our home record go as the turning point, although we scored 8 goals in our next two games (0-3 away to Hull and 5-0 at home to Sunderland), and it probably wasn’t until the defeat away at Roma and going out of the Carling Cup at home on penalties to Burnley that we really started to look vulnerable, so what was going on at that time?

Well, for a start, there were the injuries. When Scolari arrived at Chelsea there was a bit of a clearout with plenty of players leaving and only Deco arriving. Of course, Robinho was firmly in Scolari’s plans but as we know, we lost out on him and there didn’t appear to be a plan B. Then, we lost Essien to injury in September and I remember questioning at the time, how much this combination of events would cost us. Little did I know at the time that things would get a whole lot worse on the player front.

In and around the time when things started to go a little pear-shaped for us, players we had to do without included Ricardo Carvalho, Didier Drogba, Ashley Cole, Joe Cole, Michael Ballack, Petr Cech and Deco. Even when Deco returned, the pace of the Premier League didn’t seem to do much to help him and he was struggling to regain his form. John Terry, likewise, picked up an injury away at West Brom and yet turned out for his country only days later despite concerns in the Chelsea camp. For me, he really hasn’t looked right since either.

We’d made it to the Champions League final at the end of the previous season – and lost – and now, whether we wanted to admit it or not, we had an ageing side who not only might be suffering the hangover from Moscow psychologically, but seemed to be struggling physically as well.

So, we had a pretty depleted and inconsistent first team to deal with – not to mention changes in backroom staff. Because prior to things going wrong, Chelsea had just lost Steve Clarke to West Ham and that surely has to have had a significant impact on the players? For all the changes at Chelsea over the last couple of seasons – and god knows there’s been plenty of them – Clarkey was the ever present, maybe the steadying influence? And certainly things don’t seem to have gone too well for us since his departure. Of course a replacement was found quick enough in Ray Wilkins but whilst my initial thoughts were that this was a pretty good idea, the fact that he seems to have done nothing but recite the usual party-line fashion like a total yes-man has completely changed my mind about his appointment.

So, essentially what we have now is a Chelsea manager who only ever signed a two year contract to start with (in other words, he really isn’t in it for the long haul), an assistant who ‘quite frankly’ couldn’t believe his luck when he was offered the job although will apparently kiss whichever arse he needs to in order to keep it, and the hapless Peter Kenyon – all dancing to (and forever singing) Abramovich’s tune.

Still, let’s look at the positives: we’re only three points behind Liverpool (for now), we made it through the Champions League qualifiers and get to play against the team the Uefa president favours in our next game and we’ve managed to earn ourselves a replay in the FA Cup courtesy of a draw against the mighty Southend.

Oh and did I mention it’s United up next?

Scolari Happy To Be In The Dark?
Sahar’s Parting Shot