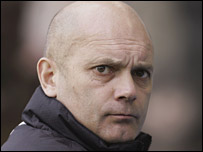 Ray Wilkins seems to have done a lot of talking at Chelsea since taking over from Steve Clarke and on the odd occasion he even gets the press a bit excited.

That certainly seems to be the case this time anyway, because despite Peter Kenyon’s constant insistence that we won’t be dipping into next month’s transfer window (who listens to him anyway?), Wilkins’ recent comments seem to have alerted the press to something entirely different.

Wilkins says “We have got the injury situation haven’t we? If you lose both in the same game, you always need cover with injuries. You have to have a top end of your side with goalscoring ability, otherwise we are not going to progress in the Premier League. We have supplemented Didier’s injury with the players we have here and Nicolas’ goals have been top drawer, so from that aspect we are thrilled and it has been fantastic.”

And from that, the press have somehow come up with the idea that Wilkins is somehow ‘dropping the biggest hint yet’ that Scolari’s about to go shopping for a new striker.

I still can’t see it myself.