Could Ballack Lose His German Captaincy? 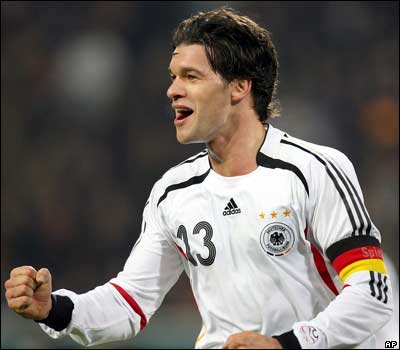 Oh dear, Michael Ballack’s loyalty to his team-mates seems to have got him in a spot of bother with Germany.

The Chelsea midfielder recently spoke out in support of German team-mate Torsten Frings after he’d been left on the bench for Germany’s qualifiers against Russia and Wales.  Werder Bremen midfielder Frings, who’s won 78 caps for his country, is said to be considering his international future and a clearly unhappy Ballack said “Maybe he is not in top form right now, but he is still playing at very high level. If he is no longer wanted, he should be told so honestly.  Respect and loyalty is the least you can expect as a deserving national team player.”

However, Germany boss Joachim Loew is less than pleased with Ballack’s outburst, stating “I am very surprised by Michael Ballack’s comments.  I am astonished and disappointed by the fact that he has chosen to make his critical comments via the media.  He is the captain and therefore an important player for me to discuss things with and nothing will change there. But the team line-up will remain the decision of myself and my team.  We treat all squad members with the appropriate respect, irrespective of whether they are young or old.”

Loew goes on “Quite often in the past, we have asked Michael Ballack as captain to address things which he sees critically or differently.”  So, isn’t that what Ballack has done? I mean, if anyone is going to question decisions it has to be the captain doesn’t it?  Well, that’s one argument, but Loew says “The fact that he chose to air these criticisms in the media is utterly wrong and incomprehensible.  No player – and the captain isn’t an exception – has the right to criticise the selection policy or decisions of the coach, or to level public criticism against the team.”

And with the injured Chelsea midfielder now being summoned to a meeting in Germany to explain his actions, he could be one less player for us to worry about when it comes to the next round of internationals!