Arshavin To Chelsea, United, Arsenal……In Fact Anyone But Spurs 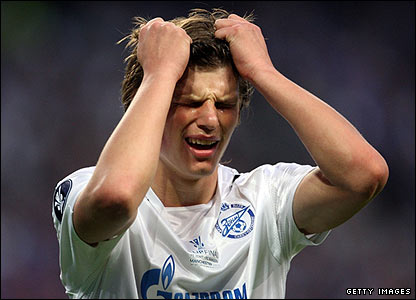 Poor old Spurs eh? As if Juande Ramos’ apparent aspirations for Championship football aren’t heaping enough misery on the Yids, it now seems Andrei Arshavin has decided to kick them when they’re down.

Despite having expressed his ‘desire’ to play in North London – because at the time he couldn’t make up his mind between Arsenal and Tottenham – eventually being forced to remain in Russia with the failure of Spurs and Zenit to reach a deal in the summer, Arshavin has made it clear he doesn’t fancy the prospect of Burnley or Swansea City next season.

Well ok, he didn’t say that in as many words, but any chance to have a pop at Spurs has to be taken right?

What Arshavin’s agent has actually said is that one of the Premier League’s ‘Big Four’ could be set to sign the player in January. Mind you, I seem to remember Dennis Lachter saying a lot of similar things in the summer as well.

Anyway, having linked Arshavin with everyone from Chelsea to Barcelona a matter of months ago, Lachter now says “There are only four British clubs he (Andrei) would play for and they are in the Champions League. It’s not about money – it’s about a team and professional ambition. Zenit is negotiating with several clubs. We are now waiting for a phone call from Zenit president Alexander Dyukov to allow us to negotiate his personal terms with one of them.”

But before any of the ‘Big Four’ think they might get themselves a decent deal, Lachter goes on “It’s most likely he will be heading for England. It’s going to be a very big transfer. Zenit can afford not to sell him cheaply.”

So, Man City it is then?

Napoli Issue “Hands Off” Warning Over Lavezzi
What’s Scolari Done For You?