Chelsea: Are We Just Lucky? 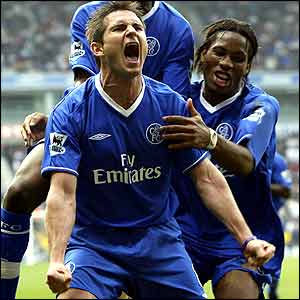 I never really look forward to the final day of the season – titles usually already decided and the thought of all them long weeks stretching ahead with nothing much to look forward to at the weekends. This season doesn’t feel any different, even running Utd right up to the last day. The thing is, I accepted weeks ago, around about the 8 point deficit margin, that we wouldn’t be winning the league this year and I’ve sat back at a sort of ‘I refuse to believe it’ distance as we’ve somehow clawed ourselves level. Self preservation? Denial? Or just accepting the inevitable?

Well, as a pre-Romanite, I’ve always found a bit of self-preservation never goes amiss, in fact, it was always an essential quality to have supporting Chelsea. ‘Always prepare yourself to come away empty handed and anything after that is a bonus’ – was an ethos that served me well on many occasions, and I guess old habits die hard.

Denial, certainly I hold my hands up to being among the ‘we’ll never win anything with Grant’ brigade and I’ve felt duty bound to stick with that this season. We’ve done a lot better than I expected us to (notice I say we and not he) but his influence is debatable and we still haven’t done anything earth shattering enough to change my mind about him. I give total credit to the players for our current position.

As for accepting the inevitable, maybe it’s because I’m a ‘glass half empty’ sort of person or maybe we’re back to that self-preservation thing again, but the inevitable for me is that we won’t have to lift a plastic replica on Sunday.

I’ve been forced to agree – due to the fact that I have a fully working pair of eyes – that over the course of the season, Utd have clearly been the better side. With the exception of the last few weeks, and maybe the odd game here and there, we’ve played some pretty woeful stuff. Fair play, we’re still level on points in spite of that, but that’s more down to Utd having a minor dodgy spell than to any superiority on our part. Of course I think the lads have done a great job in capitalising on that, but my feelings after the Wigan game kind of sum it up – “we just haven’t been good enough”.

And that’s why I think it’s inevitable that the title will go to Utd this season. We’ll both be going all out for a win in our respective games but ultimately, their superior goal difference will probably be the deciding factor. Grant can bemoan the unfairness of that all he likes, suggesting both teams are “at the same level”, but in reality, they’ve got what amounts to an extra point because they’ve been better both offensively and defensively – consistently. He might not like it, and I’m sure none of us are overjoyed either, but I can’t help thinking we need to count our blessings we’re in this position at all.