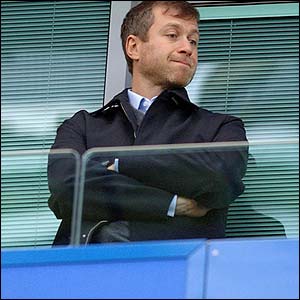 It wasn’t all that long ago when Chelsea players were winning the Coca Cola cup and it felt like a win on the pools. These days though a win on the pools would pale into insignificance considering the vast salaries they take home. But as if the ridiculous sums of money they command each year isn’t out of hand enough, they’re now being offered bonuses to do what they’re paid to do anyway.

Whilst on the one hand, we’re hearing Roman isn’t prepared to keep shelling out hand over fist, we’re now being informed he’s prepared to pay out obscene amounts in ‘special treats’. Personally, I’d have thought that winning a Premier League title would be pretty rewarding in itself seeing as that’s what players should be working towards every year anyway. However, moneybags obviously thinks that’s not much of a pay-off so he’s prepared to splash out a little bonus of £2.6 million for the squad to share should they manage it. Having said that, anything less than a complete disaster for Utd on the final day means that’s £2.6 million he’s saved himself.

The Champions League, on the other hand, has cost him plenty already seeing as the bonus scheme works pro-rata and they’ve been earning all the way to the final. As for the final itself, a win could see the squad share out another £3 million (with around £6 million having been paid out already on the way there). The first Champions League final in the club’s history and he thinks the players need an incentive to try and win it? The phrase ‘more money than sense’ has never applied more fittingly in the history of it’s use.

Is it any wonder there’s so many mercenaries in the game these days with men like Abramovich turning football from a sport played with passion into a treasure hunt taken part in for greed?

Chelsea: Rijkaard Makes Sense
Taking The P*** Out Of Players