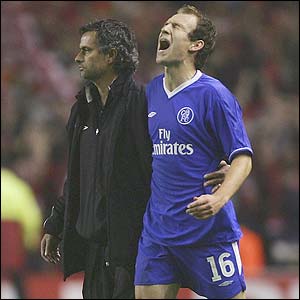 So, here we go again then? It’s time for the Dippers annual mouth-off where we’re all subjected to a drone of “Kings of Europe”, “we’ve won it 5 times”, “history”, blah, blah, blah. Even Veronin, who apparently hasn’t got a clue what they’re saying because of the “peculiar local accent”, doesn’t need an interpreter for the traditional pre-CL drivel it’s so predictable. They’re so excited bless them. No wonder it’s so hard to contain themselves though, watching everyone else play out 38 games a season while they wait for the only competition Tubby’s ever let them enter. Little wonder they feel the need to be heard then, when their whiny voices are the only things likely to be above the top three during the course of the football year.

Chelsea forums littered with posts written in the style of your average 5-year old, complete with authentic grammar reliably informing us we might as well stay at home. Now, I could say something here about this being the sensible option as far as contents insurance goes while they’re in town, but that’d be as predictable as them telling us they have the best supporters in the land. Honestly, a spot of ground decorating – they’re the boys to do it, emergency service vehicles – they’re only too willing to give a little push, they’ll even offer to hold your ticket for you! So, while they’re busy having a go at us for being “prawn sandwich eating” dispassionates – clearly a much more offensive stereotype than bin-dipping, robbing, giro worshippers eh? – they feel obliged to inform us their tickets to Moscow are already paid for (or at least will be once sufficient household goods have been secured). laugh.gif

Self-righteous? Arrogant? Or just a result of knowing their first team will get the customary rest in preparation? Albeit not convincingly, they have beaten us in our previous meetings in this competition, but how much can be put down to them focusing solely on one competition a year? Certainly we looked dead on our feet this time last year but they hardly outplayed us over 210 minutes. So maybe the extra time off from competitive football is well spent practising penalties? Or better still, perfecting the art of keeping their halo’s firmly in place whilst assuming the correct position for officials to pucker up? Needless to say, if its the latter then they’re right – we just can’t compete – so should we take a leaf out of Rafa’s “Ten Steps To Becoming A Glorified Cup Team” manual instead? Answers on the back of a stamp please.

Personally, I prefer being a proper team prepared to fight on all fronts. Although dogged and somewhat less than attractive at times, we’ve consistently got the necessary results over the course of the season to give Utd the title race they thought Arsenal were up for. Ok, we might not play the sexiest football, we might not dispense with teams as efficiently as we’d like, in fact, we might even scrape more than the odd game but we can justify a place in the CL at the end of the season. Finishing with a points total more befitting a middle of the table side or having the rules rewritten to accommodate you isn’t quite as satisfying as actually earning your place I’d imagine.

So what can we expect from this year’s almost traditional fixture? Another bore-fest? Us standing off and giving them far more respect than they deserve again? Rafa relying on his back 10 and the infamous 12th man (must mean the ref surely?)? Well, the fixtures are reversed this time so that should have some bearing on how the games are played. Rafa will surely want to wrap it up at Anfield seeing as they have failed to score at SB under his leadership. But what about Grant, how will he play it? If we manage to get an away win, will he opt for the ten-man defence at home? We’ve already seen the chaos created by his defensive tactics this season so maybe we should try to keep it as tight as we can at Anfield and go for the home win? Rafa’s record against Mourinho of course counts for nothing here and his poor attempts at mind games won’t leave an impression this time. Despite my complete lack of faith in Grant’s abilities as a manager however, the one undeniable fact this season is that we have consistently got results. Personally I think that’s more down to luck than judgement though so I will definitely be hoping he steps in a rather large quantity of something prior to these games and comes up smelling of roses.