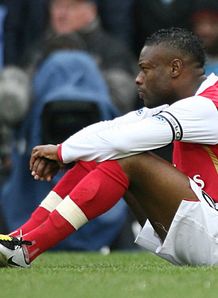 No ticker tape, no party hats, no helium balloons,
No title celebrations yet again for Wenger’s goons.
They’d had a run, surprised a few and even topped the table
But hold onto a 5 point gap, we saw they just weren’t able.
For all the praise the press heaped on, the goals they just stopped scoring
As ‘football’s saviours’ silky skills could only see them drawing.
First hailing them after Milan, then Birmingham they’re effing
“Conspiracy” the fans cry out, “it’s all down to bad reffing”
Eduardo to be fair to him, ‘that’ tackle left him slaughtered
But Taylor, did he need to be, hung, drawn and then quartered?
You’d think so, they called for his head, in fact he should retire
Football just had never seen an injury so dire.
He’d tried to cut his leg in half, or so they’d have us thinking
A ready made excuse before from 1st place they start sinking.
And Gallas in his captain’s role, well he just spat the dummy
Sulking like a two year old who’s told off by his mummy.
He didn’t want to play, he had the hump, that’s all that mattered,
Sod defending penalties and team mates limbs just shattered.
Still no surprise, this from the man who sulked at Nani’s tricking
And when he couldn’t catch him up, resorted to just kicking.
But Wenger surely missed all that with eyesight often failing?
Yet if his little boys get hurt, he wants some bugger jailing.
He puts his faith in his ‘young guns’ to show cash ain’t essential
Look, Theo was born at the club – and now he’s shown potential.
Maybe it’s his preference, for little boys and cuddles
Comparing depth with rivals though’s like oceans next to puddles.
They’ll tell you that it’s not their fault, it’s not their lack of cover
They blame the refs and the FA, they even blame each other.
At least they entertain their fans, it really must be pleasing
To hear them say “we wanna win”, then find out they’re just teasing.
Still second place won’t be so bad, at least the football’s pretty
No trophies to collect again, just the usual self pity.